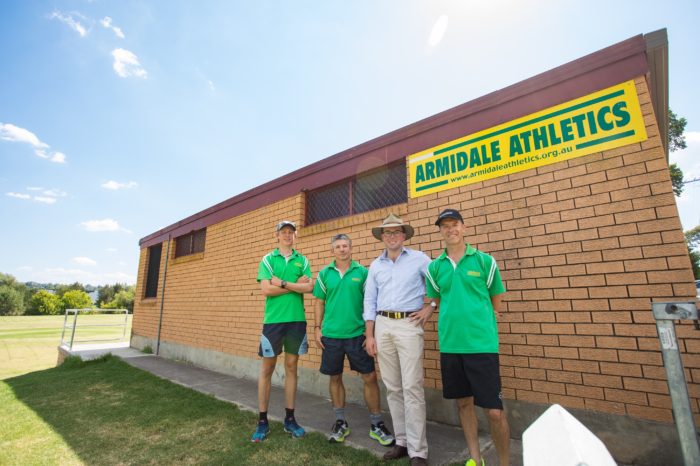 INSTANT results are a sign of the times and a new $5,000 digital timing system will put the Armidale Amateur Athletics Club in a winning spot, according to local State MP Adam Marshall.

Mr Marshall announced the club will get a funding fix that will allow it to provide instantaneous timing results for competitors in many of the most popular mass participation events in Armidale.

He said the new timing system will put the club in the box seat for giving athletes and competitors in fun runs results as they cross the finish line.

“The funding is a big time win for the club which until now relied on a commercial operator to provide instant timing results for big running events – or be left in the slow lane with old paper and print results provided well after the race has been run,” Mr Marshall said.

“But now they will be able provide that instant hit of individual times that competitors want when they take part in these mass participation events.”

Mr Marshall said the funding was through the State Government’s Local Sports Grant Program, designed to increase participation in local sports and upgrade their equipment to attract more people into healthier activities.

Athletics club spokesman Paul Billings says owning their own portable mat and timing black box with computer connection will also allow them to better control events and the scheduling of events that suit the club, rather than relying on a commercial operator.

“And that’s expensive when we do that, but by having our own timing system, it allows us to also donate more funds from these events too,” Mr Billings said.

The club ran this year’s Armidale Fun Run, with close to 500 competitors, with 10 kilometre and five kilometre sections.

“That’s our main money-spinner for the year but we also this year, for the first time, had the Duval Dam Buster with 300 taking part.”

The inaugural trail run between Dumaresq Dam and Mt Duval provided three runs of 2.5 kilometres, 15 kilometres and 30 kilometres for runners.

“Basically, everyone these days expects results on the spot, gone are the days of stop watches and spreadsheets with days of work to collate results,” Mr Marshall said.

“The club will now be able to do that instantly and upload it to the internet. It’s the way fun runs go these days and the club will also be able to have pre-enter nominations on online. It’s much quicker and easier for organisers and does away with so much manual paperwork.”

The club says the windfall will enable it to have the new system in place for the next Autumn Festival canter next month.