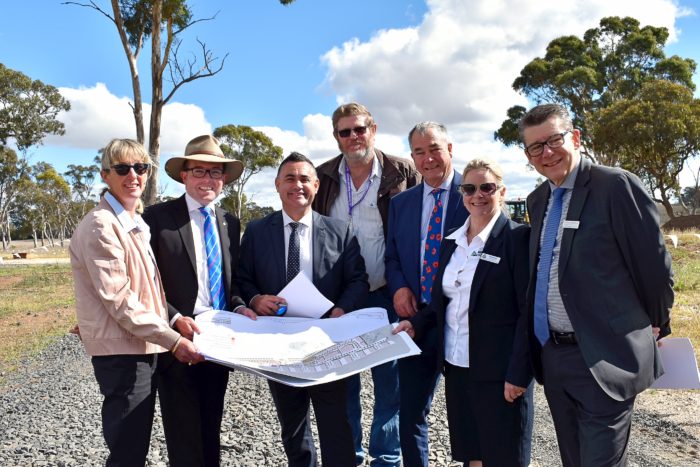 MEMBER for Northern Tablelands Adam Marshall has upped the stakes in his campaign for a $7.2 million plan to unlock Armidale Regional Airport’s proposed 73-lot Business Park, taking Deputy Premier John Barilaro on a tour of the proposed park in a bid to secure funding from the NSW Government on Monday.

Mr Marshall was joined on the tour by Armidale Regional Council Mayor Simon Murray, Councillors and staff to give Mr Barilaro a first-hand view of the area’s potential and an appreciation of the huge economic impact the project will have

“I presented the Deputy Premier with this proposal in January this year, but this was a great opportunity for him to see first-hand how important this business park will be for the region and the local economy,” Mr Marshall said.

“With around 200 new jobs set to created with the development of the park, this would be the biggest jobs creation project Armidale has seen for decades.

“Council has done a great job with the proposal and also ensuring the new $3 million roundabout on the New England Highway will be constructed shortly to provide access to the park, the airport and Saumarez Homestead.”

Mr Marshall said the proposal was well received by the Deputy Premier, but he would not be backing off until the much-needed funding was secured.

“These plans have been a long time in the making, but now the time is right to open up this park and start creating hundreds of news jobs in the region,” Mr Marshall said.

“I’ll do everything I can to get this important economic development project across the line and to unlock the huge economic benefits.”

Mr Marshall and council are requesting $5 million from the state government, with council to fund the remaining $2.2 million, to subdivide 17.5 hectares of land to the immediate south of the airport, building roads, utilities and amenities to cater to up to dozens of new industrial and commercial lots.

Mr Marshall said council was already in discussions with around 15 businesses that were keen to purchase areas of land if it was made available.

“Funding this project will be instrumental in diversifying Armidale’s mix of industries and local economy,” he said. “Developments like these appeal to a huge amount of companies, from freight and logistics to companies looking for office spaces conveniently located next to a major regional airport.

“The business park will be yet another major positive project for the region and dovetail in with the airport terminal upgrades, the TAFE NSW Digital Headquarters, the Armidale Future School, the hospital redevelopment and move of the APVMA to the region.