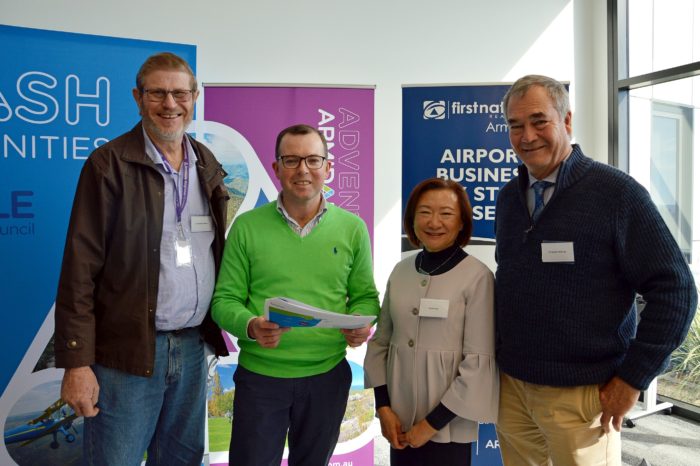 THE hunt to attract new businesses and investors which will create 200 jobs at the Armidale Regional Airport Business Park has taken off with Member for Northern Tablelands Adam Marshall and Armidale Regional Council officially launching the marketing plan and sales pitch for the precinct today.

The State Government supported Stage 1 of the 73-lot development providing $6.5 million to construct the internal roads, guttering and sewerage needed to make the site operational.

Mr Marshall said the business precinct, strategically located at the airport alongside the New England Highway, is without a doubt the next economic boom for the Armidale region.

“We have daily flights, we have high speed telecommunications and now we have an industrial development which will allow new and existing businesses to come into the city and literally take off,” Mr Marshall said.

“With the final stages of the project, the construction of roads and instillation of NBN services, expected to start in October this year Armidale Regional Council is ready to go out to the market and encourage investors to start their next enterprise in our region.

“From transport and logistics to white collar office space this development is about creating new employment opportunities not waiting for them to just pop up.”

Mr Marshall said council is already negotiating with several major companies which are interested in operating out of the business park.

“In 2011 it was identified more industrial land was needed if Armidale wanted to grow its economy, now we have a piece of property which is just waiting for an entrepreneur to take advantage of it,” he said.

“It is really exciting to see the marketing campaign which First National Real Estate has put together and will be used to promote the precinct across NSW and I’m sure it will be no time at all before we see new sheds and buildings popping up all over the site.”

Armidale Regional Council Mayor Simon Murray said it was pleasing to see a plan, which has been a number of years in the making, come to fruition

“Council has long recognised the local shortage of suitably zoned and affordable industrial land and development of the Airport Business Park will tackle this issue for generations to come,” Cr Murray said.

“The provision of well-priced land, adjacent to both our regional airport and the New England Highway and serviced with fibre to the premise will be a major economic boost for the region.

“Council commenced with the installation of critical infrastructure mains water, sewer and fibre in 2015 and from there had to gain approvals and funding to develop the business park.

“Thanks to support from Mr Marshall, and the State and Federal Governments, the access roundabout is now complete and council is well advanced with the planning and design phases of the Business Park, with Stage 1 expected to be ready for development by November 2020.”

Work is also continuing to widen the New England Highway near the new airport roundabout, allowing for a new one-metre wide centerline to be installed which will separate oncoming vehicles and reduce crashes as the intersection becomes more heavily utilised.

Construction of the highway works are expected to be finished by the end of this month.