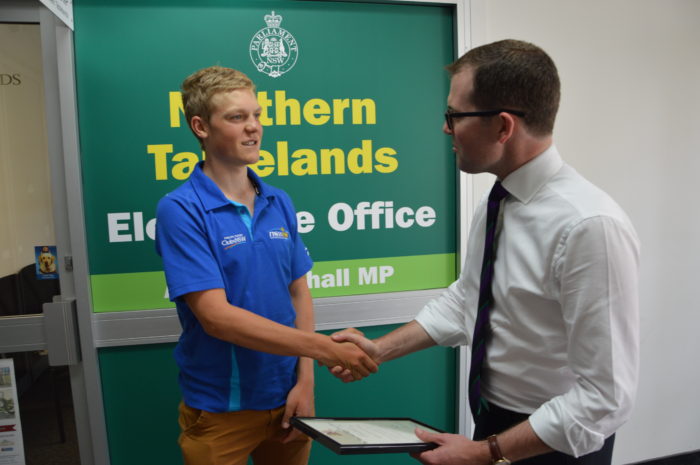 Mr Marshall said Sam was a member of the NSW Cycling Elite & under 19s Track Team where he won gold in the under 19s Madison event and silver in the Team Pursuit event.

“Sam is an impressive and mature young man who’s cycling continues to go from strength-to-strength – his achievements this year have been remarkable,” Mr Marshall said.

Sam represented Australia in the under 19 category at the 2015 Union Cycliste Internationale (UCI) Road World Championships in the USA in September. He is a member of the NSW Institute of Sport Cycling Development Team and has spent the year competing as various events throughout the state.

“He’s also been an integral part of the Northern Inland Academy of Sport (NIAS) programs over a number of years was recently awarded the 2015 Scott Campbell Lonestar Athlete of the Year and presented with the Chairman’s Award at the NIAS annual presentation night,” Mr Marshall said.

“All of this has been on top of Sam’s studies to complete his HSC this year at Duval High School, which just highlights his commitment and dedication to cycling.”

In presenting Sam with his award, the second in as many years, Mr Marshall also commended the champion cyclists’ parents Debra and David Jenner for the many years of support given to Sam to further his cycling career.

“To compete at this level Sam has relied heavily on the support of his family who have travelled far and wide across NSW and Australian to training camps and races supporting their son all the way,” Mr Marshall said.

“Debra and David deserve recognition as they have and will continue to share the highs and lows of Sam’s career.”