ARMIDALE & DISTRICT CRICKET HITTING OUT FOR INDOOR WITH $39,454 GRANT 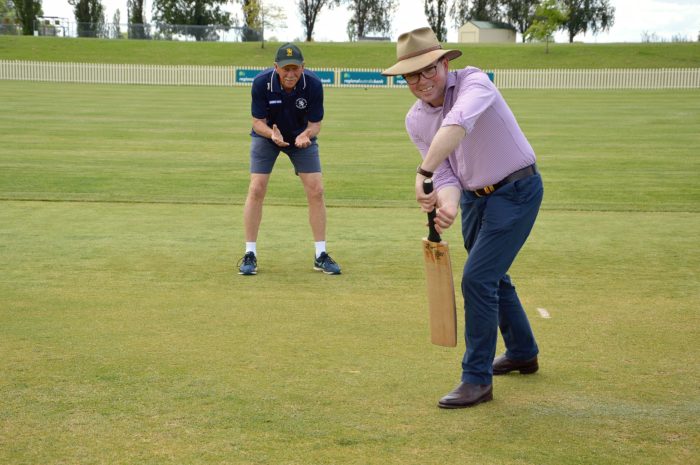 Mr Marshall said the Armidale and District Cricket Association had received the funding from the ICC World T20 Cricket Legacy Fund, which was established to help develop local cricket facilities and programs.

He said the $39,454 grant was the first big step in a plan for Armidale cricket to build a brand new indoor centre at the Armidale Sportsground.

“Cricket is a huge participation sport at the junior and senior levels in our region,” Mr Marshall said.

“Despite this, we don’t have any indoor training facilities for our players and coaches to make use of during the season and in the winter.

“The Armidale & District Cricket Association is hoping to change that very soon and this grant essentially kicks off their funding campaign to construct and fit-out an indoor centre capable to housing cricket and netball training and competitions.

“I congratulate the Association and will continue to work with them to secure further funding to turn this dream into a reality to benefit all cricketers in our region.”

Armidale & District Cricket Association President Mike Porter was thrilled with the funding announcement, saying it would be a huge boost for plans to build an indoor centre.

“This is good and it will be a big feather in our cap if we can achieve that because it will be the first of its kind around this region,” Mr Porter said.

“The indoor centre will be about 36 metres by 15 metres, which will give us four indoor cricket nets, but also allow for the netting to come down for an indoor cricket field match and to be reconfigured for netball training.

“This funding is a wonderful first step and will allow us to now go for further funding from other levels of government and possibly Cricket NSW and Cricket Australia.”

Mr Marshall said the T20 legacy funding program had up to $6 million over the next three years to support the growth of cricket participation in NSW.

The Armidale project is one of 55 successful in NSW in this round.