ARMIDALE & DISTRICT NETBALL ON THE ATTACK WITH $600,000 COURT UPGRADE 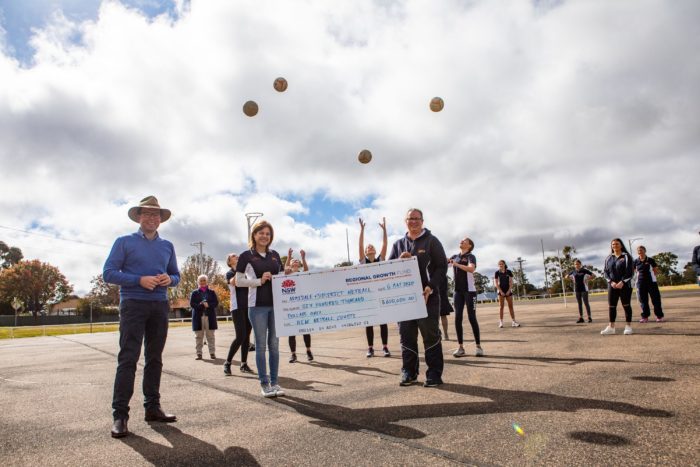 ARMIDALE and District Netball Association (ADNA) will be on the offensive in 2020 with Northern Tablelands MP Adam Marshall today announcing a $600,000 grant from the State Government grant to redevelop the dilapidated bitumen hard courts on Lynches Road.

Mr Marshall said upgrading the 20-year-old facility was a matter of urgency, with cracks in the uneven surface now placing player safety at serious risk.

“On a Saturday in Armidale, Lynches Road is the place to be with netball drawing in up to 1,000 players and spectators on any given competition day,” Mr Marshall said.

“With year-on-year growth in membership, ANDA has been working hard to address the structural issues which have developed in the courts over many years.

“Large cracks have developed in the surface making it slippery, while water damage has caused some areas to sink making it uneven.

“In 2011 the organisation, along with Armidale Regional Council, jointly funded a cover layer and filled the cracks when courts A and B were constructed, but this temporary measure has since worn away

“This grant will fully redevelop the complex, with courts A and B to be replaced while courts 1 to 8 receive new line marking and broken edging redone and strengthened.

“A lack of drainage on the courts is causing serious ongoing water damage and so ADNA hopes by undertaking these measures it may reduce the need for ongoing maintenance in the future.

“It’s important that women’s sport receives the recognition it truly deserves and I’m glad the State Government has come on board with this redevelopment which will not only improve competitor’s safety but also boost the standard of play.”

ADNA’s coaching co-ordinator Rochelle Joyce said scoring the funds would be a game-changer for netball in the region.

“Last year we had 700 registered players putting their bodies on the line, to play the sport they love on a dangerous surface,” Ms Joyce said.

“This funding will be a lifesaver for our organisation as it will ensure our players can improve the quality of their matches by reducing their risk of slipping. It also means we can continue to host our regular regional competitions.

“The Lynches Road facility is a join asset which is managed between ADNA and Armidale Regional Council.

“This means a variety of different people will benefit from this project including families who access the facility for bike riding, local roller skaters and personal training sessions.

“As this is quite an extensive project, we are hoping to have it started by the second half of this year, COVID-19 permitting.

“It is our dream that the new surfaces will be laid and ready for play at the start of the 2021 season.

“Adam has always been a supporter of our game and on behalf of our entire netball family I can’t thank him enough for securing this grant and the future of our organisation.”