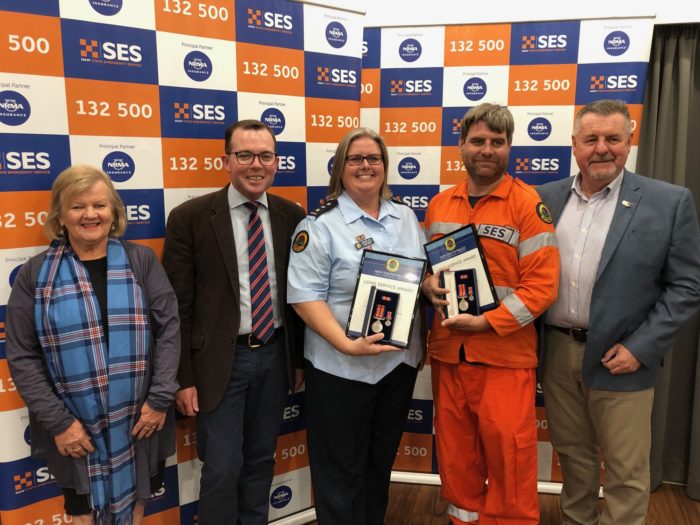 A GROUP of 22 State Emergency Service (SES) volunteers from Armidale, Guyra and Glenn Innes Units were officially recognised for their outstanding community service at the annual regional awards event last night in Armidale.

Among the group of awardees honoured, was Glen Innes unit member Richard Cambridge who has clocked up 40 years of service.

“It is a great honour to have the chance to officially recognise the efforts of the incredible volunteers who form the heart of the SES and their accumulated wisdom and experience is irreplaceable” Mr Marshall said.

“The SES has more than 9,000 volunteers in New South Wales who play a vital role responding to flood and storm emergencies, bushfires and road accidents as well as providing invaluable support for search and rescue missions.

“This group of 22 volunteers has shown the type of dedication and community mindedness that is not only a credit to each of them, but also worthy of official recognition.

“They represent a combined total of almost 340 years of community service so it’s a real pleasure to be able present these individuals with the prestigious National Medal and Long Service Awards.

“Our communities know that when things go wrong, they can reply upon the men and women in orange to be there and help them.”

“The SES draws its strength from the volunteers who give up their time to serve their communities and these individuals embody that community service tradition,” Commander Stimson said.

“It’s great to see their years of dedicated service acknowledged with the presentation of these awards, and I look forward to each of these individuals continuing their association with the SES.”