ARMIDALE HOSPITAL REDEVELOPMENT: RECYCLING THE OLD TO BUILD THE NEW 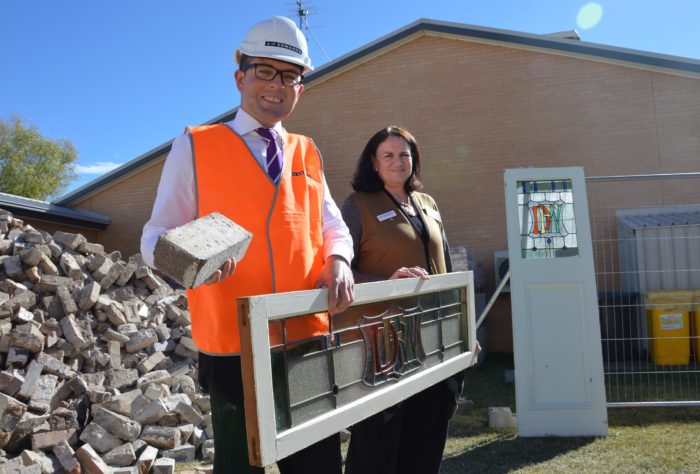 THE pile of 7,000 Armidale blue bricks stacked near Armidale Hospital is a poignant reminder of how far medicine has come, Adam Marshall said during a site inspection today.

The Northern Tablelands MP earlier witnessed first-hand the demolition of several outmoded buildings to make way for the $60 million redevelopment of the hospital.

Today he revisited the site to talk with officials about the recycling of materials saved from the old infectious diseases ward, built in 1911.

About 90 per cent of the material from the original buildings, including 7,000 locally-made “blue bricks” and some leadlight windows, are being incorporated into the new building.

“This is a symbolic move, as well as practical recycling,” Mr Marshall said.

“Medical science has meant that some infectious diseases that wrecked millions of lives, like polio and to a large extent tuberculosis, have been consigned to the past.”

“Armidale Hospital’s early infrastructure, like its infectious diseases ward, was built when people suffering these terrible diseases could not be cured, only helped to live or die more comfortably.

“Now we have an entirely new era of medicine. When they are incorporated into the new complex, those old blue bricks will serve as a reminder of how far we have advanced in this field in a couple of generations, and how far we may go in succeeding generations.”

Thanks to the work of the Armidale community in driving the $60 million hospital redevelopment, Mr Marshall said that the city is building on its historical importance as a medical centre to become a regional powerhouse in teaching and delivering medicine.

“The $60 million redevelopment will join the new University of New England Tablelands Clinical School and the impressive Ambulatory Care and Chemotherapy building to create a world-class health precinct,” he said.

“Our region will be able to claim ownership of outstanding clinical and community health services, along with impressive teaching and research facilities.”