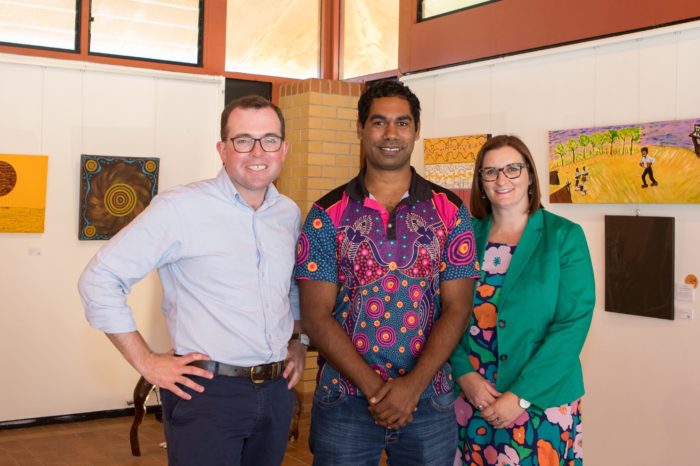 THE long-awaited expansion of the Armidale Cultural Centre and Keeping Place (ACCKP) is well underway, ahead of schedule and set to be completed early next year, Northern Tablelands MP Adam Marshall said today.

Mr Marshall took the State’s Aboriginal Affairs Minister Sarah Mitchell on a tour of the $846,000 project earlier this week, funded by the NSW Government, which completes the ACCKP’s gallery and function space 20 years after it was first mooted.

“The centre has been operating since 1988 and is one of only a few in NSW that has grown and thrived – even though it’s been hamstrung by having only one gallery space to run exhibitions out of.

“The second gallery was originally part of the plan and the frame was built in 1999, but was never finished but come January it will be.”

The project will also see a new off-street carpark constructed adjacent to the Keep Place and a new entrance, which are all essential for older citizens and people with a disability.

“It’s a massive win for the centre and for the Aboriginal community – but it’s also an exciting development for the entire regional arts sector,” Mr Marshall said.

“The completion of these projects will mean that we will be able to have more exhibitions, increase art sales, provide higher income for Aboriginal artists and increase our programs,” Mr Quinlan said.

“I’m already lining up artists and exhibitions for next year to fill the new space.”

Mr Marshall said the centre worked with some 64 Aboriginal artists and four Aboriginal art galleries across NSW but with the new gallery it would be able to expand the numbers of artists keen to exhibit their works in Armidale.

“The Armidale centre is the only fully-operating Aboriginal cultural centre in the New England and North West region so it is a significant venue for everyone,” Mr Marshall said.

“It attracts about 16,000 visits a year and $20,000 in art sales which translates to about $3.4million to the local economy and generates 15 jobs. Economic modelling suggests that could double with a second gallery.”