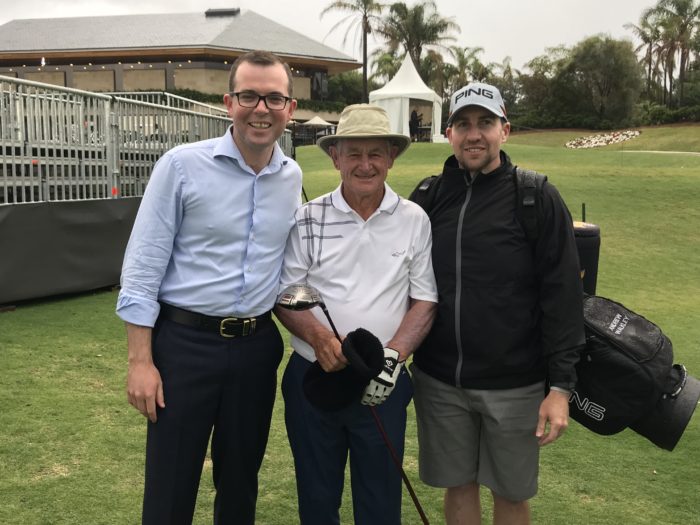 TWO Armidale golfers have made their mark on Australia’s biggest golfing event – helping to launch the 102nd Australian Open in Sydney this week.

Isaac Riches and 79-year-old Jim Sheedy have today walked the fairways with current golfing superstars Jason Day and Jordan Speith, gaining invaluable advice as they played with the pros.

He may be barely into primary school, but aged just five, Riches has already attracted the attention of the golfing world. Fresh from his appearance on the Tonight Show in the USA, Isaac worked on his stroke this week with former World Number 1 Jason Day and will hit the honorary first tee shot tomorrow to get the tournament underway.

“It’s amazing to be on the same course as so many pros – it’s truly an honour,” Mr Sheedy said.

A twenty time Armidale Golf Club champion, Mr Sheedy, who still plays of a handicap of seven and regularly hits under his age of the stick, could probably teach the international golfers a thing or two, but he says he’ll keep an eye on the Pro’s form.

“I’d like to take home their experience with chipping and putting and I want to learn how to hit it a bit farther,” he said.

The Australian Open is supported by the NSW Government through Destination NSW, with local MP and Minister for Tourism and Major Events Adam Marshall also facilitating Mr Sheedy’s nomination for the Pro-Am competition. He was on-course this morning to watch Jim tee off.

“Jim is a legend of the Armidale course and I’m sure he’ll be able to translate his good form to the hallowed fairways of the Australian Golf Club,” Mr Marshall said.

“These events show that despite the sport’s big prize pools and household names, regional golf maintains its status as an approachable community pastime, with many local legends.

“I congratulate both Jim and Isaac for their dedication to the sport and wish them all the best this week.”