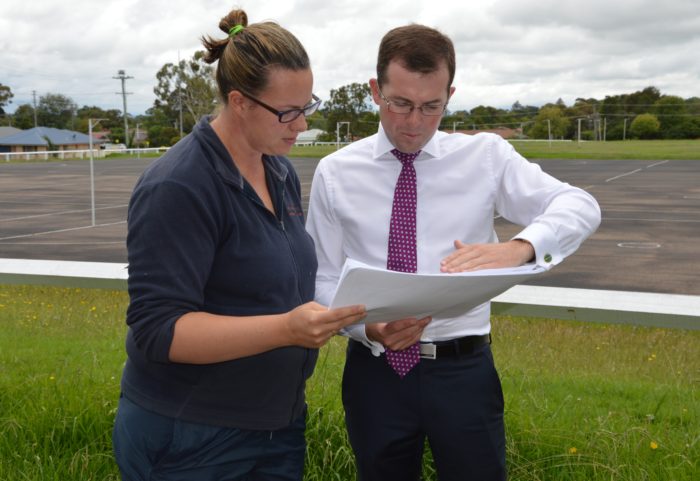 IT’S been two years in the pipeline but finally the Armidale District Netball Association is ready to hit the “go” button on the construction a regional children’s playground at the Lynches Road courts, after receiving a further $20,000 from the NSW Government’s Community Building Partnership (CBP) program.

Northern Tablelands MP Adam Marshall met with Association committee members at the netball courts this week to announce the grant, which brings the government’s total contribution to the playground to $45,000.

“New England Community Mutual, Armidale Sports Council and Armidale Dumaresq Council have also contributed to the project which is part of the association’s four-year strategic plan.

“The club has close to 700 members and on a Saturday during the netball season there can be up to 1,000 people at the courts, half of them children, so there is certainly a great need for a large-scale playground.

“It’s also a great way to bring mums back to the game – they know their children can play safely while they’re busy on the courts. It’s an excellent concept and will be a huge boon for Armidale as the playground can also be used by the general public.

“I’d like to commend the Netball Association on their enthusiasm and commitment to this project. They’ve been very determined and I’m delighted that the NSW Government has provided $45,000 to the cause.”

“The netball courts have a dual purpose; when they aren’t being used for netball games, children and their parents come down here with their bicycles and ride around,” Ms Joyce said.

“We hope to get construction will get underway in February and be finished by early April. It has been nearly two years in the planning and fundraising and grant writing and we are certainly grateful for all the support we’ve received – it’s a great outcome for the whole community.”