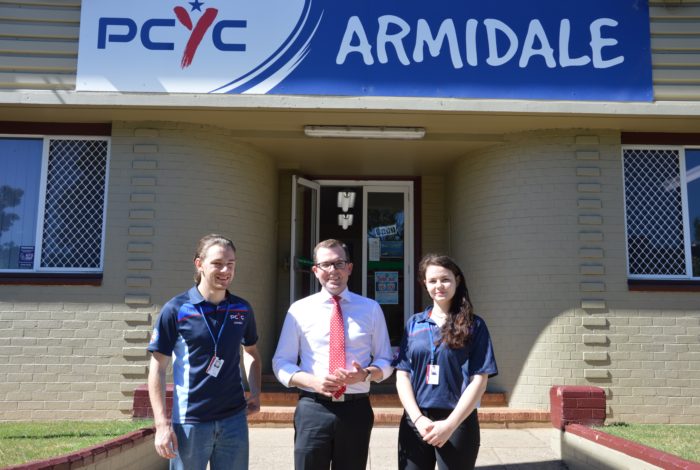 THE Armidale Police & Community Youth Club (PCYC) will use a $33,000 State Government grant to undertake a major renovation to its toilet and bathroom areas, according to Northern Tablelands MP Adam Marshall.

Mr Marshall has announced the funding this week after the local PCYC had submitted an application for a project towards an overhaul of old and outdated toilet and changeroom facilities.

“The Armidale PCYC is an ageing facility with different parts of the building being constructed from 1948 to the 1970s,” Mr Marshall said. “There are six different toilet and changeroom areas which are in desperate need of repair and maintenance which includes cracked, unusable or leaking toilets, cracked tiles, leaking pipes, and lack of change room space.

“It has some 1,700 members and it’s been an integral sport, recreational and social facility for over 68 years and is used by a lot of local groups.

“Most significantly, it’s a supervised and safe place for young people to enjoy a range programs and entertainment and recreational activities.

“This funding will enable them to give those members and visitors a centre that continues to offer decent amenities, and modern facilities in keeping with contemporary standards.

“It also makes it more attractive to more groups to use it, and with that low cost fee structure in place, allow it to be able to offer more programs for more young people and meet community demands for different activities.”

Mr Marshall said the latest funding boost followed a $13,000 grant under the same Community Building Partnership program in 2014 to effect roof repairs to the building.

Mr Marshall said the club had hoped for nearly $60,000 funding this time around to complete the changeroom part of the project too but he was working with the club management now to examine alternative areas for funding access and identify other fundraising possibilities.

A PCYC spokesman said the club operated over six days a week with programs from gymnastics, dancing, fencing, four streams of martial arts, table tennis, footsal and parkour, a type of obstacle course activity including movement and climbing.