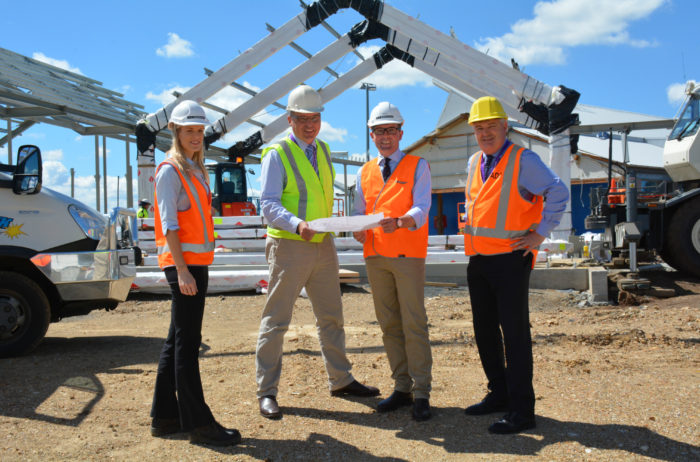 STOW your tray tables and fasten your seatbelts – as $9.42 million in upgrades to and expansion of Armidale Regional Airport are preparing for touchdown. The concrete foundation for the building is complete, with the steel superstructure and plumbing now fully installed.

“Armidale Regional Airport is the gateway to the broader Northern Tablelands region and this upgrade and expansion will ensure it has the capacity to cater for a growing number passengers, flights and airlines which will boost our local economy,” Mr Marshall said.

“It’s important that it’s just as attractive as the rest of our region, and the new facility will vastly improve the passenger experience. As well as looking better, usability will be improved – with new electronic departure screens and computerised check in gates making our facility comparable to much larger airports.”

This week, work has begun on the installation of the huge wooden supports on the building – which will add an authentic local charm to the world-class facility. The State Government has contributed $6.55 million to this stage of the project.

The new space, which doubles the size of the existing terminal building, includes a new café and retail area, baggage carousel, passenger check-in, additional seating and meeting spaces. Security will also be enhanced – with a modular baggage handling design allowing for additional screening – a necessity for larger aircraft.

Weather permitting, stage one will be completed by the end of May.

Mr Marshall said the terminal redevelopment would be swiftly followed by upgrades to the airside parking apron – allowing larger, heavier and more aircraft to use the airport.

“With ever increasing carriers and passengers, there’s appetite for larger planes to fly into Armidale,” he said.

“Larger aircraft like the Q400 are more efficient, comfortable and faster. The NSW Government has contributed $1.5 million to these upgrades, which will benefit industry and travellers alike.”