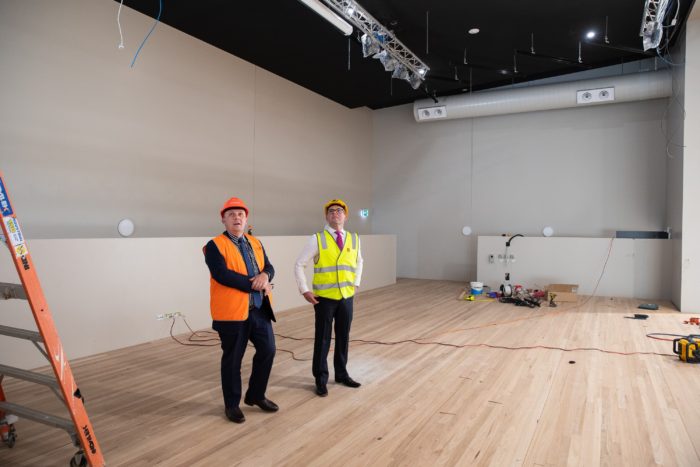 Mr Marshall said the project was now 85 per cent complete, with the focus shifting to the building’s internal fit-out.

“Contractors Richard Crookes Construction are now at the pointy end of this historic project, working on the components which will bring the performing arts and sport together under one roof,” Mr Marshall said.

“Since September 2021 the building has taken shape before our very eyes, however the last couple of months has seen work move inside with the internal fit-out very well progressed.

“The spectacular timber floor been laid and eventually it will be marked for basketball courts.

“Internal doors and windows are in, with the partitions for the fitness and movement studios area also now in place.

“It was great to see the electricians hard at it installing the stage and performance lighting that will complement the acoustic baffles which have already been mounted.”

Mr Marshall said finishing touches were also being made to the building’s exterior.

“Landscaping has started, with a large amount of turf laid around the centre’s main entrance and perimeter,” he said.

“Footpaths linking the structure with the school are also largely complete, providing a direct thoroughfare to the College’s vibrant main quad.

“The contractors are now talking about the centre’s commissioning phase, which says to me it won’t be much longer before we have students performing, competing and celebrating the achievements of their peers within its four walls.”

The multi-purpose centre will include generous hall space, stage and seating for performances and school functions, green room, two indoor basketball courts, a fitness and movement studio and two general learning spaces. It will be capable of comfortably seating almost 2,000 people.

“This will be the premier – and largest – community multi-sport and entertainment indoor facility in the Northern Tablelands,” Mr Marshall said.
“I cannot wait to see it open to the community and used for large and small sporting and cultural events.

“It’s first major test will be hosting the New England Conservatorium of Music’s 2022 New England Sings, involving more than 1,000 school students from across the region, in October.”