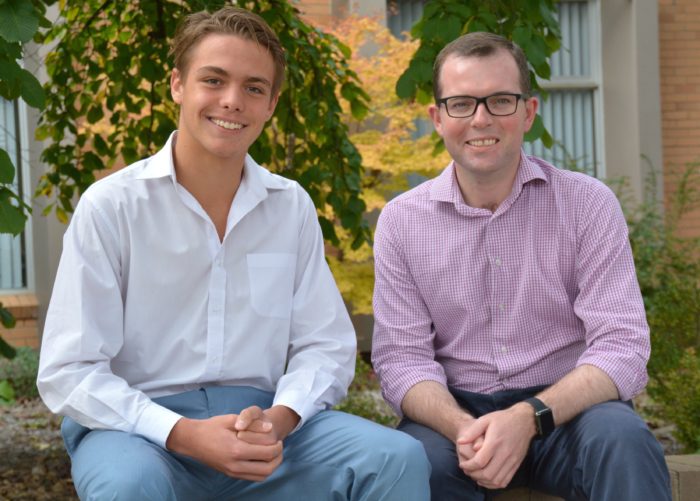 THERE could be another young-gun politician in the making for the Northern Tablelands, with Armidale High School student Jesse Streeting selected to represent the region at the upcoming 2017 YMCA NSW Youth Parliament.

Northern Tablelands MP Adam Marshall nominated the Year 10 student to be a Junior MP for the region this year and take his seat in State Parliament’s Legislative Assembly, affectionally known as the ‘Bear Pit’.

Mr Marshall was impressed with Jesse’s interest in the community, politics and his skill as a public speaker and debater.

“I get a lot of political topics and became interested in how politics occurred behind the scenes, discussed the electoral process and it spiralled from there,” Jesse said.

Mr Marshall said Jesse is making all the right steps for a life in politics.

“It’s never too early to start being politically aware and active and interested in issues that impact on your community,” Mr Marshall said.

“Jesse’s political interest and avid debating history will make him a perfect contender to join the political bearpit. He comes highly recommended by his school and I look forward to seeing how he performs on the floor of this year’s Youth Parliament.

“Without young people becoming engaged, the state and nation would be governed entirely by the political old guard. By entering into the political discourse, young people can ensure they’re suitably represented and provide a more egalitarian society for all.”

Jesse is one of two Junior MPs nominated by Mr Marshall to represent the region at the Youth Parliament, with Moree Secondary College’s Jasmine Robinson also set to take her seat in the NSW Parliament.

Jesse has been busy reading up before the Youth Parliament’s camp in July and he has plans to make the most of the two-week training session.

“Definitely, if an opportunity arose, politics would be something I’d like to pursue – I’ve got a passion for it,” he said.

The YMCA Youth Parliament takes young people on a two week high-intensity camp in July and September, including viewing several days of parliament in operation. Participants debate issues affecting young people and the nation, receiving advice and feedback from MPs.

Jesse says more young people should take up an interest in politics.

“I think it’s a rewarding thing to dabble in politics – you get to see how things are being governed in the country you live in – and I think more young people should get involved,” he said.