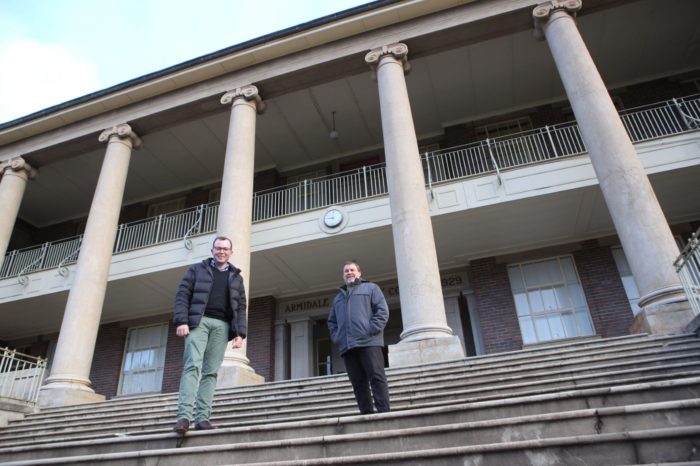 Three weeks after Armidale was announced as one of four sites to be home to the newly-formed Department of Regional NSW, the hunt to find suitable premises to house the 100 new public servants coming to the city has formally begun.

Member for Northern Tablelands Adam Marshall today hosted Department of Regional NSW Secretary Gary Barnes in Armidale and wasted no time in showing him through the Old Armidale Teachers’ College, as a prospective location for the new department.

Mr Marshall is pushing the option of using the State Heritage-listed C.B. Newling Building to house the 100 new high-value jobs coming to town, which he said would breathe new life into the iconic landmark.

“Since the University of New England walked away from the building in 2018, the community has been waiting for an opportunity like this to come along,” Mr Marshall said.

“The Old Teachers’ College, which is now in the hands of NSW Education, is just what the department is after, with plenty of office space, good access and links to high quality digital connectivity.

“UNE had about 80 staff working in the building during its tenure, which shows the Teachers’ College is more than capable of catering for that volume of personnel.

“The New England Conservatorium of Music is the only tenant in the building and the Department of Regional NSW could easily occupy the sections of the building not used currently used.

“I think this is would be the best possible outcome for the preservation of the heritage listed building, which has suffered for decades through lack of expenditure and maintenance.

“The best way to properly preserve a building of this ilk is to have it utilised and with a major government department based there, alongside the Conservatorium, there will be more impetus to not only keep the facility in working order, but also lift amenities up to the standard expected of a modern workplace.

“Let’s be honest, if you are someone who has relocated to Armidale after working in the concrete jungle of Sydney how exciting would it be to work out of a building which is so visually spectacular and rich in local history.”

Mr Marshall said since the announcement, his phone has been running hot with local businesses and real-estate agents looking to support the department’s relocation.

“There is a real buzz in the air at the moment as Armidale’s business community catches on to what this move really means for the future of the local economy,” he said.

“The feedback I have had has been overwhelmingly positive, with many taking confidence in the fact the government sees our region as a place which has the services to support significant public and private sector organisations.

“We will have staff based here who understand the issues affecting towns like Armidale and know the local challenges and benefits of regional life and they will be in a position to help deliver the support, infrastructure and programs that communities like ours need.

“There are many boxes which have to be ticked before a final location is settled but I’m hoping we’ll have a final decision and announcement soon.”

Armidale will be one of four new offices for the Department, with offices also to be established in Queanbeyan, Dubbo and Coffs Harbour.