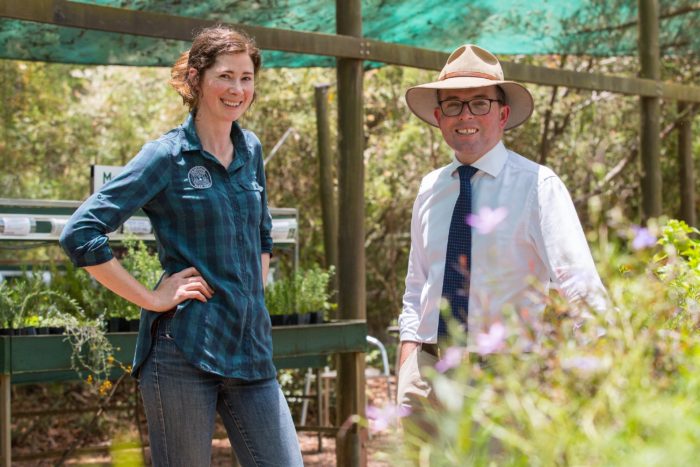 NORTHERN Tablelands MP Adam Marshall today announced $10,000 in State Government funding for the Armidale Tree Group to buy a new seed harvester that will go where no other man-made machine has been able to go before into the New England bush.

The grant will finance a grass-grabbing seed harvester mounted on the front of a utility to better harvest native seed around the region. Mr Marshall said the new-beaut ute Australian-made contraption will allow the Armidale Tree Group to collect more seed to be propagated for use in revegetation projects across the New England.

“With their Every Tree Counts project, the Armidale Tree Group is aiming to create a series of habitat patches and smaller stepping stones to link the east and western sides of the tablelands,” Mr Marshall said.

“Every Tree Counts is a landscape-scale project addressing environmental issues across New England, raising funds and building partnerships to achieve that. This weed harvester feeds directly into those aims.

“The seed harvester works like a giant bristle brush that rotates with the bristles picking up seed heads and throwing them into a seed bag.”

Armidale Tree Group General Manager Alicia Cooper said the new grass grabber seed harvester would allow them to go where they hadn’t been able to go before with their old harvester.

“It will mean we can access areas that were inaccessible prior to this, like travelling stock routes or where there’re trees in tricky spots,” Ms Cooper said.

Until now, the group has used a large trailer dragged behind a utility and could only be used in paddocks, not in bushland or densely vegetated area.

Mr Marshall said the Armidale Tree Group had started in 1983 and operated with three permanent full time staff, a part-timer and a handful of casuals.

“Last year I announced a $13,061 grant the group to develop an education centre for biodiversity conservation and this latest funding adds to that wealth of environmental activity and education that the group is continuing to support,” Mr Marshall said.

The new harvester will get to work this Autumn, the optimal time for gathering seeds.