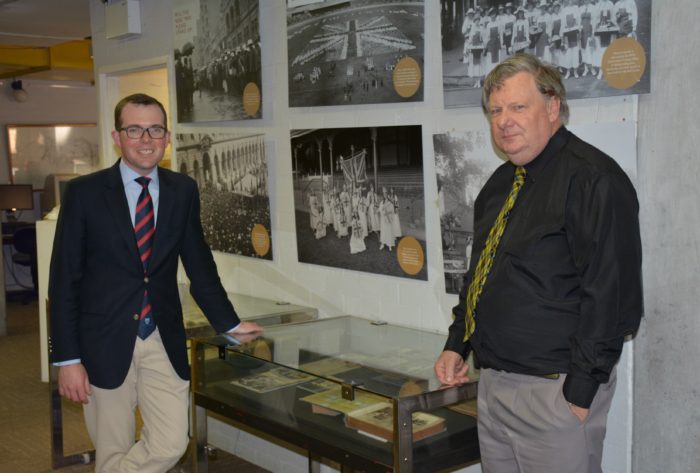 Member for Northern Tablelands Adam Marshall, left, gets a sneak preview of the Windows into Wartime exhibit in Armidale with University of New England Archivist Bill Oates.

HISTORY buffs have a unique opportunity to learn more about our nation’s home front, with a new exhibition on display at the Armidale’s Old Teachers College from today, Monday, 31 July.

Northern Tablelands MP Adam Marshall toured the Windows into Wartime exhibition last Friday, ahead of today’s opening. He said it had been produced by State Archives and Records NSW for the Centenary of ANZAC – an event marking 100 years since Australia’s involvement in the First World War.

“This unique exhibition documents the variety of activities that took place on the home front including recruitment campaigns, the development of soldier settlement schemes, the establishment of the Red Cross in NSW, the infant health movement and patriotic fundraising activities,” Mr Marshall said.

“There is also a lot of local historical material added by Bill Oates and his team to provide an added insight into life back home here in the New England during the Great War.”

Mr Marshall said the series of historic images captured by NSW Government photographers during and immediately after the War depicted how communities across the state worked together to support Australia’s war effort.

New digital technologies have enabled these images to be brought to life 100 years later from original glass plate negatives. Mr Marshall said the Northern Tablelands had made a significant contribution both on and off the battlefield, with heavy sacrifices that shattered the community.

“While we’re all familiar with local recruitment drives like Inverell’s Kurrajongs, our home front was just as active throughout in providing comfort, support and resources to the volunteers,” he said.

“This was continued throughout and after the war with local assistance for returning servicemen and widows. Our region quickly became home to hundreds of soldiers after the war, with massive soldier settlement projects like Kentucky and Glen Innes providing employment and a community to returned service men and women.”

Windows into Wartime is a free exhibition at the The Heritage Centre (Building CN02) at the Old Teachers College, on the corner of Dangar and Mossman Streets, Armidale. It will be on display until 1 September 2017.