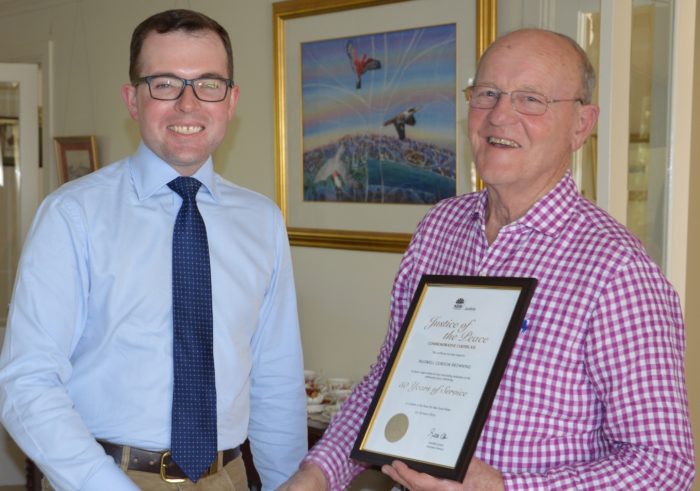 Marking a milestone for Max Browning, right, when Northern Tablelands MP Adam Marshall presented him with a certificate to mark the 50 years he had served as a Justice of the Peace.

HE might be retired now but Max Browning’s record of service as a Justice of the Peace has been recognised by Northern Tablelands MP Adam Marshall this week.

The former Armidale accountant has been honoured with a certificate for the 50 years he served as a JP.

“Max played a very important role and there’s not too many of us who can claim to providing such a service to his community in between his professional and personal obligations and duties,” Mr Marshall said.

“It is an impressive record and all the more significant for the extra-curricular time he put into doing something for the community he loves so much.

“I’m extremely honoured to have been able to present Max with a certificate from NSW Attorney General Gabrielle Upton – there’s not many people who achieve such an outstanding milestone and this recognition is a simple but well deserved honour.”

Mr Browning told the MP his role as a JP was one he enjoyed immensely because he’d been able to help so many people in many ways.