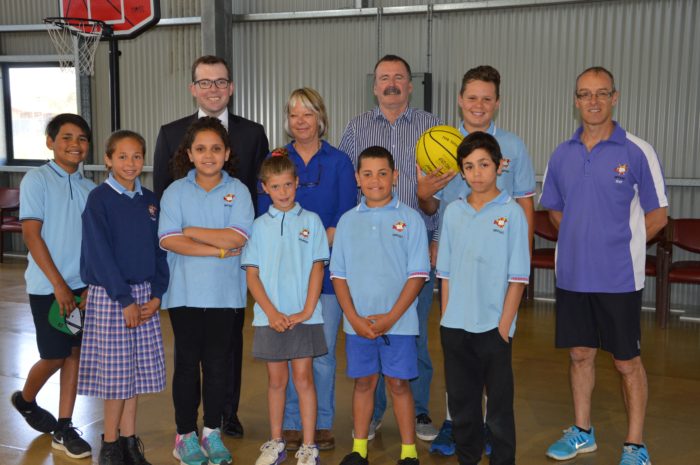 NORTHERN Tablelands MP Adam Marshall has announced funding of $50,000 that will help improve facilities at the Minimbah School in Armidale and enhance its attraction for wider community use.

Mr Marshall made the announcement yesterday during a tour of the Minimbah School campus, which provides educational facilities for over 130 pre-school and primary students.

Mr Marshall said the benefits and the value of the $50,000 Social Housing Community Improvement Fund grant from the NSW Government extended more widely into the local Aboriginal community.

The Minimbah Aboriginal Corporation, which run the school, will put the money towards a much-needed toilet block in the school’s multipurpose hall.

“The toilet block will allow the school to extend the use of the hall to more people in Armidale, not just the school community but also to the nearby residents of the Narwan Village housing precinct and to other sporting and social groups beyond the Aboriginal community,” Mr Marshall said.

“The multipurpose hall currently doesn’t have toilet facilities that meet building codes and sporting standards for outside school use and this grant will set the ball rolling on making that a reality.

“The money will help build male, female and disabled toilets and changeroom facilities and there’s a strong chance we can value add with some additional funding but also the valued and voluntary help and support of some local groups and trades.

“I’m hoping a grant application to Armidale Regional Council for some extra funds under the Stronger Communities Grants program will be successful and allow for the completion of a better toilet block.”

Mr Marshall said the local Rotary Club had also undertaken to provide $5,000 towards the building and a local building firm was donating in-kind contributions to the Minimbah project.

“This will build on Aboriginal cultural and heritage activities for Minimbah and the indigenous community in Armidale because the upgraded project means the hall could be used for other sporting and cultural events outside the school activities and for things like concerts, exhibitions, wakes and general sports activities,” Mr Marshall said.

The Minimbah grant is one of three for the Northern Tablelands electorate under the SCHIF funding for this round.