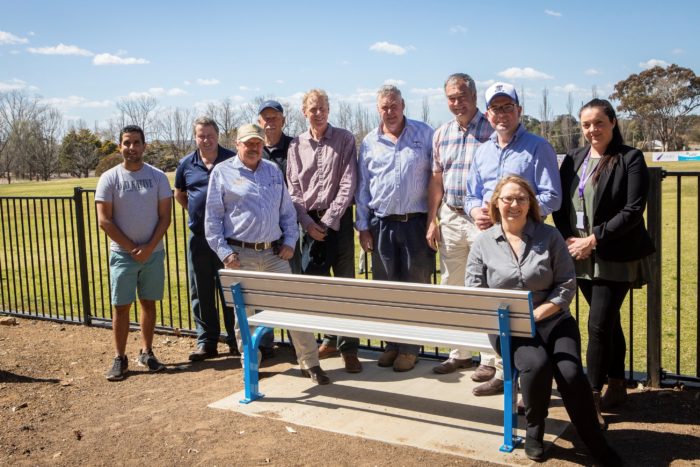 THE days of rugby union matches being cancelled due to flooding at Armidale’s Moran Oval are a thing of the past with work officially complete on an $80,614 effort to reduce flooding at the ground.

Mr Marshall said the completed project was as good as a premiership for many of Armidale’s sport clubs.

“Rain or hail now nothing will stop play at Michael B Moran Oval,” Mr Marshall said.

“In the past storm run-off has inundated the two playing fields meaning games have had to be cancelled, causing havoc for competitions like New England Rugby.

“Since this grant from the Stronger Country Communities program was announced last year we have seen both a 50 metres long and 1.2 metre high retaining wall and an improved engineer-designed drainage system installed.

“The city’s sporting clubs had been calling for these works for some time and I’m glad the NSW Government, partnering with Armidale Regional Council, has been able to deliver.”

Mayor Simon Murray said having Moran Oval operational all year round would be of great benefit to the city’s economy.

“Sports tourism is worth $16 million to Armidale’s economy each year,” Cr Murray said.

“Moran Oval is home to the hugely successful annual Armidale Blues Rugby Knock-Out Carnival which brings hundreds of players and spectators and thousands of dollars into our pubs, restaurants and accommodation providers each year.

“With these works complete council, which owns the field, has an all year round venue it can confidently market for other regional sport events – without fear of wash out.”

“These works have come as a major relief to our football club,” Mr McMillon said.

“This year we have had no worries about flooding but in seasons past it has been common for two or more games to be cancelled due to wet weather and run off.

“An improved playing surface will be invaluable not only for our club, but for the multitude of sports and community groups which use Moran Oval.

“These works are important for the continued development of rugby union in the New England and I thank Mr Marshall and Armidale Regional Council for their support.”