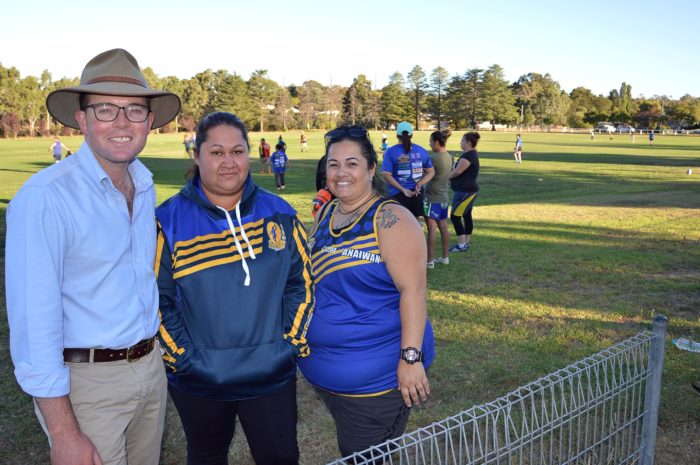 THE 2019 rugby league season is almost here and the mighty Narwan Eels have been out on the training field for almost three months now – preparing for a winning season.

Northern Tablelands MP Adam Marshall has delivered an early win for the team in the form of a $20,000 grant from the NSW Government’s Local Sports program. The grant will allow the club to construct a safety fence at their home ground – Newling Oval.

The MP attended last Monday night’s training session to congratulate the committee, the players and their supporters.

“The Narwan Eels Rugby League Football Club are making some terrific inroads into improving their new home ground at Newling Oval, so I was pleased they were successful in securing support for new safety fence,” Mr Marshall said.

“I was impressed to learn that the team has been in pre-season training now for three months, and from what I saw on field, they will be team the team beat in Group 19’s first grade this year.

“The committee, led by Lisa Waters, are doing a great job in building up the club and this $20,000 grant will, importantly, allow security fencing to be installed at the Kentucky Street entrance.

“This will make the ground safer and allow the home team to collect gate fees for home ground games.

“I commend Lisa and the hardworking committee for their untiring efforts in working to improve the home ground and build up the team spirit.”

The Group 19 rugby league season kicks off in early April and the Narwan Eels are keen to further develop the home ground, with community support.

“The fence will be a great start, as we’re always concerned about small children being able to make their way on Kentucky Street, so the extra safety for your kids is really welcomed,” club president Lisa Waters said.

“We are also going to be able to collect a home gate entrance fee and that will allow us to build up revenue for other improvements including a canteen.

“The Narwan Eels are primed for a great season and we are looking forward to enjoying a permanent home ground this season.”