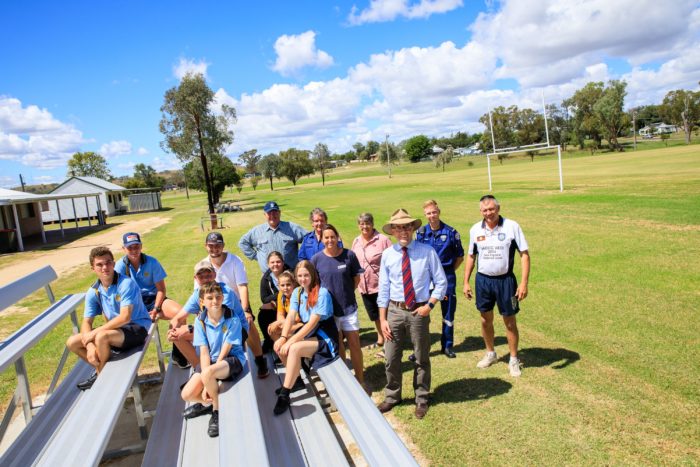 A $73,061 State Government grant has given Ashford Roosters Rugby League Club reason to crow, with Northern Tablelands MP Adam Marshall joining with committee members to announce the funding to complete a lighting, power and accessibility upgrade at Ashford Sportsground.

Mr Marshall said the project would give the grounds the charge it needed to achieve its full potential.

“This grant is no chicken feed – helping enhance the functionality of the ground which acts as home to the local footy club, multiple community events and designated Neighbourhood Safe Place,” Mr Marshall said.

“Over time, local’s ability to utilise the facility has been hampered, with poor lighting and insufficient power supply limiting when, and how many, people can access the venue.

“This project will bring the grounds up to ‘full-strength’, first by installing high-quality LED lighting around the ground.

“This will enable Ashford Roosters to offer training at night for junior and senior players, and provide opportunity for local groups to host evening community events.

“An upgrade of mains power will also be welcomed by the club, which relies on generators to provide power to operate the canteen during home games.

“Events like footy, the Ashford Salami Festival and Ashford Show bring in excess of 3,000 people to town annually, giving businesses an economic boost at different times throughout the year.

“There has been an incredible amount of State Government and Inverell Shire Council investment to improve local facilities recently, which I think can only result in that visitation growing into the future.”

“Each pole will have a light control switch, so that organisations like the State Emergency Service can access the grounds in emergency situations,” Mayor Harmon said.

“This will also apply when the ground is used as the Neighbourhood Safe Place, community assembly and evacuation point and landing pad for the Westpac Rescue Helicopter.

“Council staff and local contractors have already started the work, which we expect to be complete by the end of June – perfect timing for the Group 19 Rugby League season.

“Sport is a significant contributor to the Ashford community’s health and well-being. With better lighting and power, the Ashford Sports Ground can be used more extensively, from summer in cooler times of the day to winter when it gets dark earlier.”