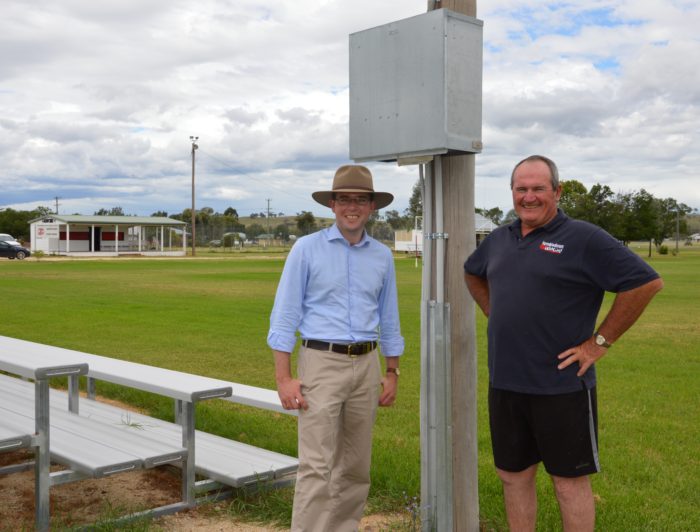 THE Ashford Rugby League Football Club can now begin an upgrade of the power supply to its canteen after receiving news from Northern Tablelands MP Adam Marshall of a $5,500 grant from the NSW Government’s Community Building Partnership program.

Mr Marshall delivered the good news to the club’s President Mick Lewis while in Ashford recently and said he was delighted the NSW Government supported grassroots sporting groups in their bid to improve their local facilities.

“The club has been using an auxiliary generator to deliver power to the canteen which is both unsustainable and costly,” Mr Marshall said. “This grant will allow the club to go ahead and install three-phase power to the site.

“With the growing demands on the club, this was priority for them and I’m delighted that together we have secured this grant.

“It will certainly ease the work of volunteers who presently man the canteen – it provides the club with a vital source of income so it’s important there is a viable and safe venue to operate from.”

“Last year the club also secured a NSW Government grant to build spectator seating which has ensured the venue is capable of meeting the needs of the Ashford community,” he said.

Mr Lewis thanked Mr Marshall for his support and said it was gratifying to know the NSW Government was keen to support small rural community projects.

“This is great news – it’s important we get this done first and then we’d like to move on to some other projects,” Mr Lewis said.

“We have a lot of community support in Ashford so it’s important we keep working to improve these facilities.”