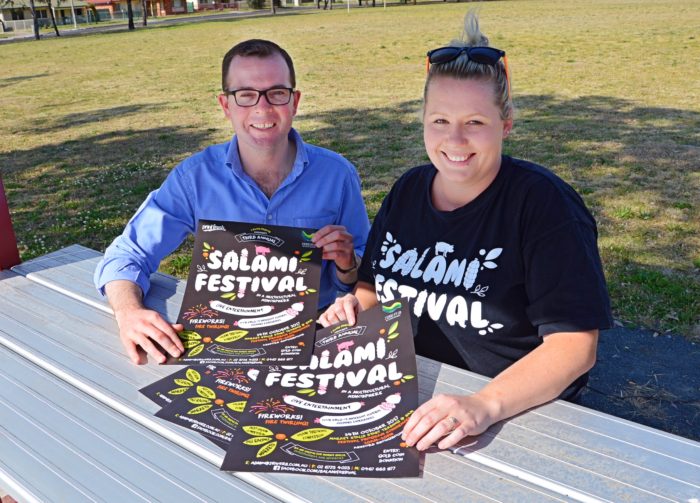 Northern Tablelands MP Adam Marshall met with Ashford Salami Festival Manager Pene Riggs last week to get an update on the program of events next weekend.

WITH the region’s culinary doyens working overtime preparing for next weekend’s third annual Ashford Salami Festival, the community event has received a financial boost from Northern Tablelands MP and Tourism Minister Adam Marshall, who today announced a $5,000 grant from the NSW Government.

With the help of the funding, Mr Marshall said this year’s festival will feature an evening program of live music, fireworks and fire twirling, for the first time.

The local MP caught up with Festival Manager Pene Riggs last week to get an update on festival arrangements and preview the day’s activities.

“This year’s event will be a cracker of a day and along with the salami competition there will be a lot of culturally diverse food stalls, salami and cheese making demonstrations, and to top it all off, a salami throwing competition and pig races,” Mr Marshall said.

“This extra funding will allow the festival to extend into the evening at the Ashford Showground, entertaining visitors from right across the region.

“Ashford has a proud multicultural history with many Italians settling in the district to farm tobacco so their salami making recipes and skills have been passed down through the generations and throughout the community.

“I had the pleasure of not only attending the inaugural festival in 2015, but also judging the salami competition and had a fun, and rather fulfilling time, sampling around 200 homemade salamis made by very talented locals.”

Ms Riggs said the festival provided an opportunity to celebrate Ashford’s rich cultural and salami making history at a family-friendly event as well as raise much needed funds for their small community.

“The inaugural event in 2015 saw local community groups and small business raise more than $5,000 from the day’s activities so we’re very excited about adding the evening entertainment this year,” Ms Riggs said.

“We have a jam packed program of events and activities this year including the best homemade salami competition, the famous Noah’s Thoroughbred Pig Races as seen on TV and live entertainment all day.

“There will lots of children’s rides, belly dancing, fire twirling and fireworks in the evening and all for only a gold coin donation. Camping is also available for $10 a night.”