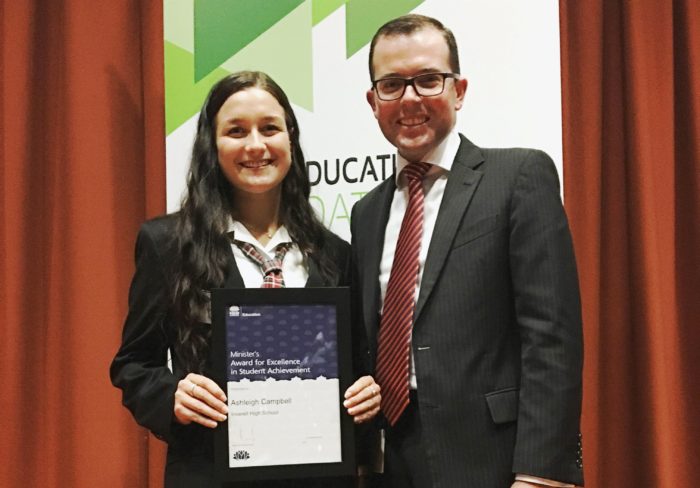 MEMBER for Northern Tablelands Adam Marshall has today congratulated Inverell High School Year 12 students and past captain Ashleigh Campbell on being presented with a NSW Minister’s Award for Excellence in Student Achievement during a Public Education Foundation – Awards for Educational Excellence – ceremony at Parliament House yesterday.

Ashleigh was one of only 13 students from across the state to receive this recognition.

“Ashleigh is an incredible young woman,” Mr Marshall said. “She strives for excellence at all times in all her academic and extra-curricular endeavours.

“She is an exemplary student who encourages others to participate fully in school and community events.

“In her capacity as a school leader, Ashleigh has been proactive in ensuring that all students, irrespective of cultural or socio-economic background, have been active participants in the school community.

“Ashleigh is a caring person who is committed to ensuring that every student feels that they are a valued member of not only the school but also the wider community.”

Mr Marshall said that Ashleigh was widely respected in the Inverell community and was a magnificent ambassador for public education.

“There aren’t too many students like Ashleigh and she is a terrific example of some of the great things that are happening in our public education system across our region,” he said.

“Ashleigh impressed the Minister and the crowd at the awards ceremony with a performance on stage.

“She is a thoroughly deserving recipient of this prestigious award for her dedication to improving Inverell High School and the lives of those around her.”