AUTOMATED VEHICLE TAKING TO A ROAD NEAR YOU SOON IN ARMIDALE 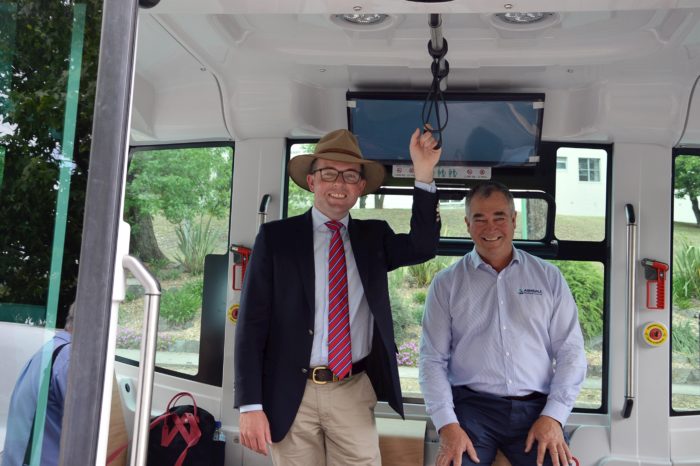 ARMIDALE is about to stake its place at the forefront of the development of driverless vehicle technology, with a fully-automated shuttle hitting the road late next month at the University of New England.

Northern Tablelands MP Adam Marshall was joined by Armidale Regional Council Mayor Simon Murray at the University of New England yesterday to inspect the shuttle while it was being take through its paces, mapping the route it will start traveling next year.

Mr Marshall said Armidale was one of just two regional centres in NSW, the other being Coffs Harbour, to host an automated vehicle trial and local drivers and pedestrians were likely to encounter the automated shuttle over the next 12 months as it moved from initial testing and mapping on the UNE campus to a loop in the Armidale CBD.

“It’s exciting to see Armidale at the forefront of this cutting-edge technology that will undoubtedly play a big role in shaping the transport network of the future,” Mr Marshall said.

“But the automated vehicle trial will also have a direct benefit for Armidale during the trial itself by providing a CBD loop service aimed at helping the elderly and those people with mobility needs.

“We expect the public to be able to take a ride in the shuttle from about late January and we encourage people to get onboard, experience driverless travel and give us their feedback.”

The fully-automated EZ10 vehicle can carry up to 12 passengers.

Mr Marshall said the vehicle will be doing mapping at UNE until 21 December and during that time it will be moving at very slow speeds, accompanied by a rolling traffic management team.

“Safety is the highest priority for the project team,” Mr Marshall said. “Advisory signage will be in place at all entry points and along the trial route advising road users that they are entering an automated vehicle route.

“Some drivers may be slowed by traffic management or asked to stop until advised to continue. The vehicle route includes the Queen Elizabeth Drive roundabout entry to UNE.”

KEY POINTS OF THE TRIAL:

Phase 1: Introduce services at the University of New England transporting students and staff from the residential colleges to the university campus

Phase 2: Introduce a shuttle service for residents around the Armidale CBD area focusing on services for the elderly and those with mobility needs

Phase 3: Expand operations in the CBD area and include regular services to the New England Regional Art Museum (NERAM)