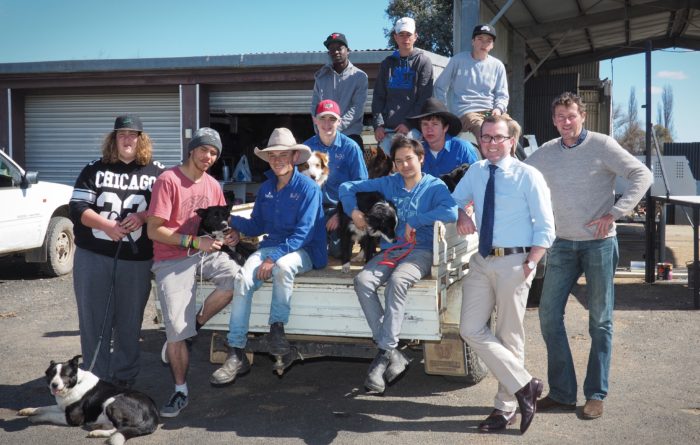 Northern Tablelands MP Adam Marshall, second from right, and BackTrack founder Bernie Shakeshaft join some of the BackTrack boys as they load up for a dog-jumping demonstration at Parliament House and Government House.

The stately grounds of Sydney’s Domain and Government House will host the lively activities of the Armidale-based BackTrack team of young people and their border collies next Wednesday, August 24, when the team stages a dog-jumping demonstration.

When the NSW Governor Frank Hurley and Mrs Hurley visited the BackTrack compound in January this year, Northern Tablelands MP Adam Marshall issued the Parliament House invitation and the vice-regal couple responded with an invitation to Government House on the same visit.

Education Minister Adrian Piccoli will host the Parliament House jump in the Domain following a morning tea with government ministers and MPs in the Speaker’s Garden.

In the afternoon 60 guests, including many BackTrack supporters from the philanthropic sector, will watch the Government House demonstration at 2pm, followed by afternoon tea.

“The BackTrack program has been a phenomenal success in re-engaging at-risk young people with education, training and the community and placing them in jobs,” Mr Marshall said.

Founded by youth worker Bernie Shakeshaft a decade ago, BackTrack has now become the first youth program in the world to have its outcomes evaluated through university research.

Results of the three year collaborative research by the Universities of NSW, New England and James Cook and the Hunter Medical Research Institute will be published in The Australia and New Zealand Journal of Public Health this year.

The findings reveal that after involvement in the program participants show significant reductions in psychological stress, suicide ideation, multiple suspensions from school and weekly illicit drug use.

Overall the youth crime rate in the communities in which BackTrack operates have reduced substantially. A survey of 300 community members found they wholeheartedly support the program and considered it a preferable way to combat youth crime than and increasing police presence.

“Incidents of youth crime where the BackTrack programs operate have plummeted for a number of years,” Mr Marshall said.

“Furthermore. these young people are catching up on their education and learning skills which help them find work. The key to the program is that participants can stay in it for as long as they need it and that it is voluntary.”
BackTrack offers four key programs: Iron Man Welders, Paws Up dog jumping, AgLads agricultural work and The Paddock, the classroom with a teacher employed three days a week.

It also delivers the State Government’s Links to Learning program in the local area, engaging 80 young people at their local schools who have been identified as at risk.

The organisation earns 25 percent of its own income. The remainder comes from the philanthropic sector and from government.