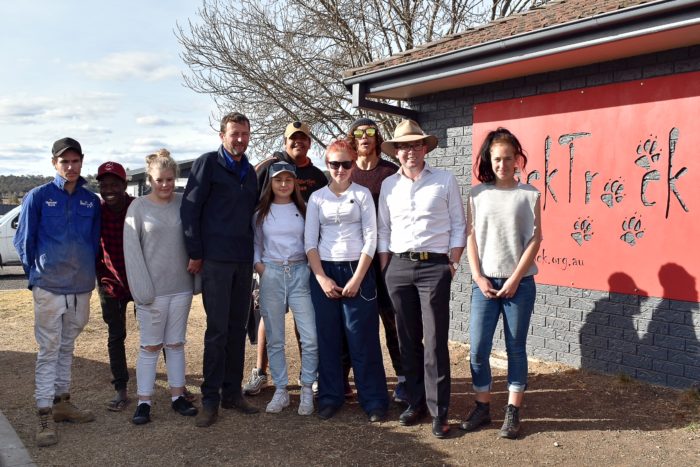 The local State MP today announced BackTrack Youth Works had secured a financial boost of up to $100,000 from the NSW Government to develop its working initiatives into a workable business model – and pitch its inventive ways for an even larger funding prize.

The BackTrackers have won through to the second stage of the government’s new Youth Employment Innovation Challenge, designed to find innovative ways to create new jobs in some the state’s areas worst unemployment hotspots.

“The Back Track program is widely and quite rightly seen as the most successful one of its kind in tackling youth unemployment across this region, and that’s been recognised with this funding and even more opportunity,” Mr Marshall said.

“This is a wonderful track record for a program that initially began with taking troubled young blokes into a team setting where they worked with dogs to train them up for jumping at bush shows.

“In the past few years, the boys have been joined by young women and girls, and they’ve jumped even more hurdles in coming up with more training programs that are giving them confidence, respect and the social skills to find pathways to work.”

Mr Marshall said that under the BackTrack model, the youngsters had shown the way in how innovative work and social training can make disadvantaged kids employable – and how it could take them out of the welfare system.

“And what we’ve seen so far has been outstanding because the BackTrack record has shown an 87 per cent success rate in training young people to find jobs,” Mr Marshall said.

BackTrack is the brainchild of former jackaroo, founder and manager Bernie Shakeshaft, who has welded a great team of young kids into confident, emotionally resilient and skilled young people from the back of a shed just outside Armidale.

“One of the points of difference is that we are targeting kids from a lower socioeconomic background – kids more likely to spend a lifetime on welfare, they’re the ones we are really targeting,” Mr Shakeshaft said.

He said the aim was for punchier outcomes. By getting kids “away from the cops and not using the health system” – those outcomes could translate into the unemployable to the independent and employable.

Ms Marshall said BackTrack Youth Works was among 17 projects that successfully pitched for financial support under the Challenge in Sydney earlier this month.

“I’m delighted BackTrack Youth Works has got through to this stage. They will now get training, mentoring and up to $100,000 in funding to develop their ideas into workable business models which can be rolled out locally.

“It is working to scale up an existing program through its BackTrack Rural Contracting project, a social enterprise supporting the transition to lifelong independence. It supports young people with work readiness training and skills, responsibilities within the community, and psychological and educational interventions as needed.”

Mr Marshall said BackTrack had already gone onto bigger and better stages, including programs now in places like Dubbo, Lake Cargelligo, Condobolin, Bourke and Tamworth. It has even starred on the big screen, with a documentary on it premiering at this month’s Sydney Film Festival.

Successful projects that make it through to the third and final stage of the Challenge may be able to access up to $850,000 in funding.

The $10 million program is focusing on projects that can support areas of NSW with high youth unemployment including the Central Coast/Hunter, Illawarra, North Coast, New England/North West, Southern Highlands/Shoalhaven and Western Sydney.