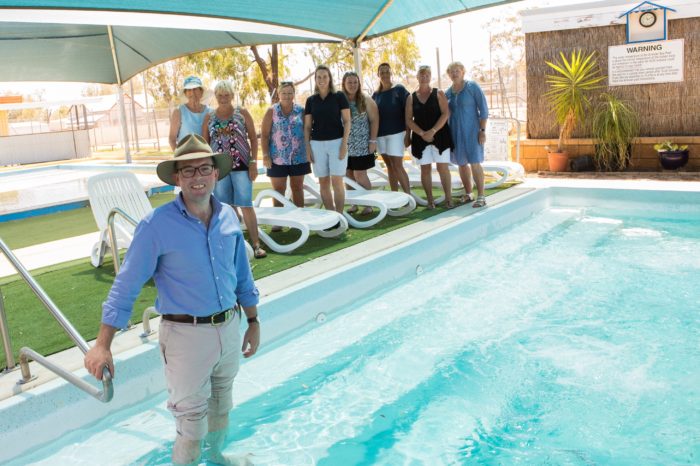 BOOMI is set to receive a huge boost with six local community groups sharing in a $126,390 State Government funding package that will give it a physical facelift and install some great new public amenities, Northern Tablelands MP Adam Marshall announced today.

Mr Marshall said the funding would give local groups some financial help to provide a raft of improvement projects, ranging across the Boomi Artesian pool complex, the community cooperative buildings, the amateur thespian society, the hall, tennis courts and the local preschool.

“This is a close-knit community that has come together to put forward a number of exciting projects to give Boomi a facelift, some much needed new facilities, but also provide new amenities for tourists,” Mr Marshall said.

“This funding will make a huge difference in Boomi and make it an even more attractive community.”

The hot Artesian Spa Baths are one of Boomi’s greatest assets and attracts scores of tourists, especially during the winter months. The funding will see the installation some removable stairs, a hoist and sling and bariatric wheelchair there.

“These improvements will make it much easier for older people and those with a disability to use the pool and attract more grey nomads to stop in for a visit,” Mr Marshall said.

The Boomi Community Cooperative buildings will also be repainted and Boomi’s entrance signage will be upgraded to encourage people to turn off the beaten track and stay a while.

Boomi local Georgia Brown said the six community groups worked together to prioritise a list of improvements they believed were the most important to support for the funding application under the NSW Stronger Country Communities Fund.

“This funding is fantastic and we can’t wait to get started,” Mrs Brown said.

“It is really, really exciting in these dry times to have an injection of funds for these projects. It will give everyone a lift.”

One of those groups is the BATS, the Boomi Amateur Thespian Society, which every two years puts on a theatrical production in the local hall – and gives a sellout show to fans that come from throughout the shire.

They’ll now be able to buy a projector and screen to help create the backdrops for those performances, instead of the laborious hand-painted imagery the volunteers have to produce.

Mr Marshall said the funding would also provide for the installation of a commercial dishwasher, stainless steel bench surrounds and the electrical and plumbing works involved, that will go into the memorial hall.

Mrs Brown said they also hoped to upgrade the public toilets there, given the current septic system struggles to handle events like the BATS nights.

The tennis committee has scored a big hit too. The club will replace its court lighting and build a practice hitting wall.

Mrs Brown is secretary of the preschool committee and says the funding will stretch to painting a bright and colourful mural on a storage container at the preschool grounds.

“It’s a big red shipping container but we’re going to make it more appealing and local artist Annette Coward, who does beautiful landscapes and also does the backdrops for the thespian society, will do that work for us,” Mrs Brown said.

“There’s lots of works for us all to do and we’re excited about that so hopefully we can do them simultaneously; that’s the plan if it’s practical.”