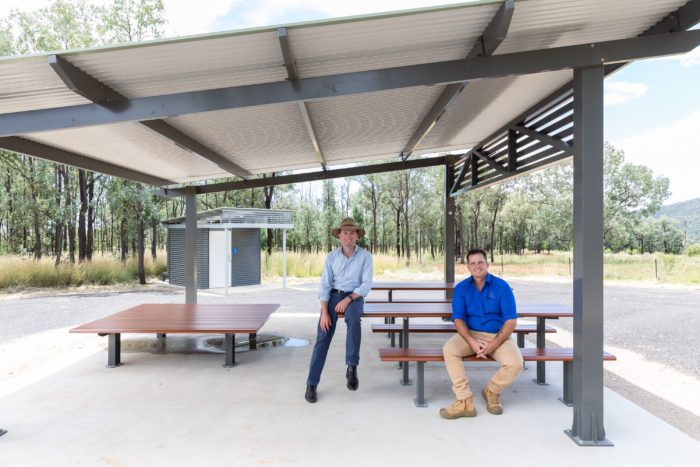 The Big River Dreaming project was announced in 2018 and seeks to promote Bingara’s position on the Gwydir River by linking the town’s waterfront, recreational facilities, pool and Aboriginal heritage into one accessible tourism destination.

Mr Marshall said clean, functioning and accessible rest stops will play a big role in encouraging travellers to stop and take a break in Bingara.

“I spend more than half my year in the car and on long road trips I take note of the towns which have quality public amenities and make a point of planning my rest breaks around these,” Mr Marshall said.

“Bingara is now definitely on that list with fantastic new facilities dotted around Bingara and built to service the needs of various types of travellers.

“Using funds from both the State and Commonwealth Governments, Council has improved several rest stops and picnic areas on Delungra Road and Whitlow Road, between Bingara and the Myall Creek Memorial.

“There are now two picnic areas on Whitlow Road which have tables and accessible parking.

“Finally, thanks to this project the truck stop area north of Bingara now has a new toilet which will service truckies cruising the Fossickers Way at night.

“The Big River Dreaming project is grand in scope but piece by piece it is coming together and successfully attracting new visitor dollars to town.”

Mr Marshall added work is continuing on a major bike trail which will connect each of the new rest stops.

“Along with targeting grey nomads Gwydir Shire Council is also trying to tap into the increasingly popular cycle tourism market,” he said.

“Currently bike trails are being built which will utilise the rest stop, picnic areas and connect to the Myall Creek Memorial.

“This project will further strengthen the tourism sector by attracting younger travellers and families, and provide the local community with an additional recreational option in their own back yard.”

Other components of the Big River Dreaming Project include a pontoon on the Gwydir River at Bingara, footpaths linking attractions and recreational facilities around town and interpretive signage.