BINDAREE BEEF RAISES THE STEAKS WITH $4 MILLION FOR PLANT UPGRADE 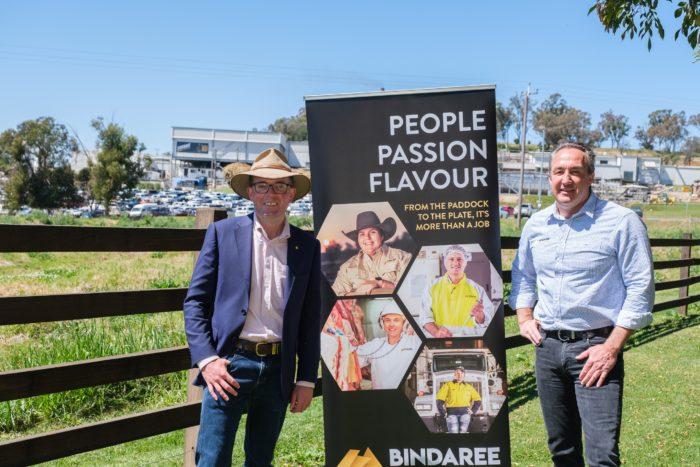 PREMIER Inverell meat processor Bindaree Beef will ramp up production and processing to meet increasing demand from local and international markets and employ an additional 200 full-time staff, following an announcement of a $4 million grant from the NSW Government’s Regional Job Creation Fund today by Northern Tablelands MP and Minister for Agriculture Adam Marshall.

Mr Marshall said the funds will enable Bindaree Food Group, which will also invest more than $4 million in the project, to build a training facility, a staff wellbeing centre and expand its boning room floor, creating 200 new full-time jobs at the plant.

“Bindaree Beef is one of our region’s largest employers with more than 800 staff contributing to the processing of 1,300 cattle per day,” Mr Marshall said.

“In order to maintain that high level of production, Bindaree Food Group will use this grant for an ambitious upgrade and redesign of processing areas and staff facilities.

“Adjustments will be made to the abattoir’s boning room in order to significantly boost its ability to process and package more of its award-winning meat products.

“A wellbeing centre will be added on site to improve safety standards for all employees, while an innovations and training centre will ensure the Bindaree Food Group is upskilling local people, drawing them into the industry through a skills-based training program.

“Supporting this project will also help the company acquire accurate consumer data and the research technology needed to boost its production capacity and enhance its paddock-to-plate supply chain model of high quality meats.

“The employment market in Inverell has experienced a number of setbacks recently and I hope this announcement gives the community renewed hope of local job prospects in the future.”

“Regional NSW is the engine room of the state and supporting major expansion projects like this one by the Bindaree Food Group helps stimulate regional economies and boost livelihoods and local employment,” Mr Marshall said.

“This fund allows businesses to fast track their growth plans, expand their operations and create a solid base for job creation now and into the future.

“Setting businesses up for success helps the local community grow, as new jobs mean more people earning a wage and spending their pay packets in local stores, cafés, restaurants and on local services.”

“The capital works that we are committing to will increase our ability to value add the carcass to supply customers further down the supply chain,” Mr McDonald said.

“As Australia is an extremely high-cost country in comparison to our beef export competitors in South America, it is imperative that we play in a completely different space.

“In the 26 years that Bindaree has been at Inverell, we have never seen a brighter opportunity for Australian beef on the world stage.”

Bindaree Beef is the second Inverell business to receive support from the Regional Job Creation fund, with Boos Engineering receiving support earlier this year to expand its operations.