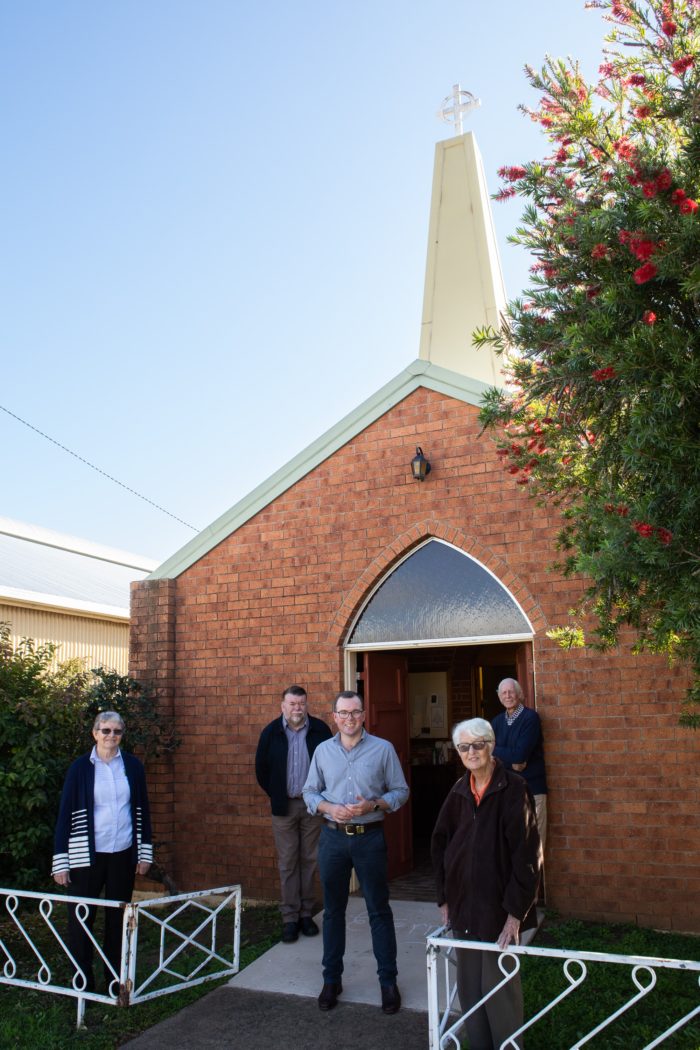 THE pastoral care offered by Scots Presbyterian Church at Bingara will continue for another generation with Northern Tablelands MP Adam Marshall today announcing a $15,000 State Government grant for a maintenance program to keep the building serviceable.

Mr Marshall said the church might be a relatively small building, but over its life the Scots Presbyterian Church had left a big mark on the Bingara community.

“While more modern buildings have been built up around it, the Scots Church, built in the early 20thcentury, remains as a tribute to the Bingara’s early years,” Mr Marshall said.

“To ensure the church and hall stay functional a number of works will take place including the replacement of an old leaking tank and the repainting of the front fence.

“Effort will also be made to address large cracks developing in the churches’ brickwork and fix the deteriorating front door.

“I commend the church committee for everything it has done to preserve these beautiful buildings over the years, and look forward to seeing that work continue for decades to come.”

Member of the Scots Presbyterian Church congregation Shirley Brien said what the church’s small congregation of 20 people lacked in numbers, it made up for in love and care.

“Over its life, the church and hall has always cared for the local community,” Ms Brien said.

“The building was first built in the early 1900s as the meeting place of the Independent Order of Oddfellows Manchester Unity (MUIOOF), an organisation that raised funds to support residents who fell on hard times in a period of no welfare system.

“Since transitioning the building into a church, our congregation has continued to offer support to our residents where we can.

“We have contracted local builder David French and his apprentice to undertake these works and he will source what supplies he can from our local IGA Hardware.

“With a new fence up we think the church will be a lot more presentable, which might encourage more people to attend our Sunday Services.

“We hope these works will be enough to ensure this historic building can continue to serve the community for future generations.”