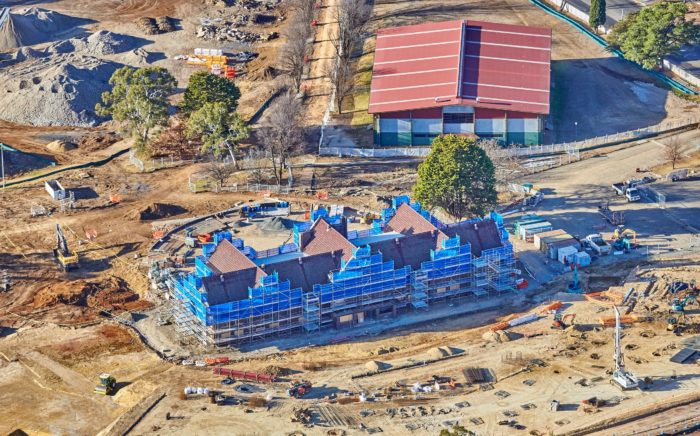 Mr Marshall said the largest infrastructure project in living memory in Armidale was progressing on schedule and was pleased to provide the images, taken for the Department of Education, offered a new perspective on the scale of this landmark educational development.

“All up the entire footprint of the school will be 18 hectares, with every centimetre of the former Armidale High School campus being utilised to deliver the best education precincts anywhere in country NSW,” Mr Marshall said.

“From the air the community can see the extensive ground works which have been undertaken since the former buildings were demolished, with thousands of tonnes of soil being moved onsite to allow building to start on state-of-the-art classrooms, catering for 1,500 students.

“Scaffolding is also now up around the the historic Armidale High School central building, with the historic building to be transformed into the home of the school’s new Creative and Performing Arts Department.”

Mr Marshall said plans and the business case were being finalised on one of the projects most exciting components, the $18 million regional multipurpose performing arts centre.

“Currently I’m working with the Department of Education to finalise the designs and business case for this cultural facility,” he said.

“The performing arts centre will be the jewel in the crown for this development with seating for upwards of 400 people allowing it to stage musicals, theatre productions school presentations and conferences, all of which will generate new income into the local economy.

“The latest census data shows Education and Training is the region’s largest employer so by brining education and the arts together I believe not only can we foster new creative talent but we can also encourage a growth industry which will deliver jobs and attract new visitor dollars to the city.”