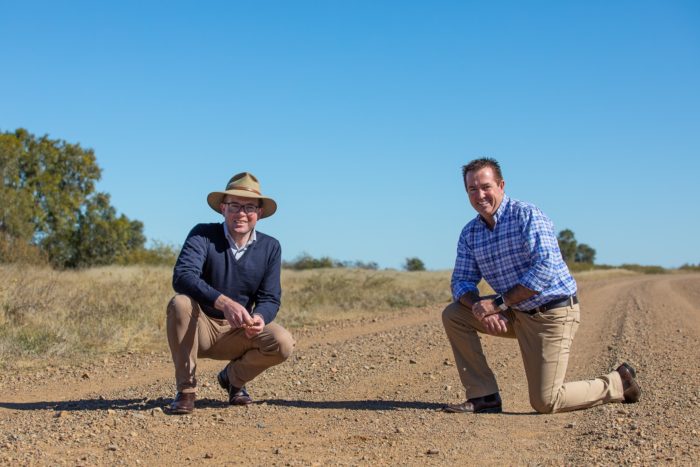 Minister for regional Roads and Transport Paul Toole, left, local grazier Allan Gillogly and Northern Tablelands MP Adam Marshall on the section of Terry Hie Hie Road which is about to be sealed thanks to State Government funding.

TRUCKIES and travelers will soon have a quicker, more scenic route to Moree with Northern Tablelands MP Adam Marshall and Minister for Regional Roads Paul Toole recently inspecting an almost six-kilometre stretch of the Terry Hie Hie Road, which will be sealed under round one of the new NSW Fixing Local Roads program.

Mr Marshall said a $1.08 million grant would get the tar-trucks rolling on this project by Christmas.

“This is just the start of a long-term plan to transform Terry Hie Hie Road into a key tourist route between Moree and Tamworth,” Mr Marshall said.

“The first stage will see a total of 5.8 kilometres of dirt road sealed, south from the intersection of Melburra Road, leaving only 18.2 kilometres of the 77-kilometre road unsealed.

“Terry Hie Hie Road is the most direct route for travelers going between Moree and Tamworth, and if it was fully sealed, locals believe it would shave 40 minutes from the trip between towns.

“This would make it the journey of choice for grey nomads, keen to visit Moree’s artesian spas, the Sawn Rocks of Narrabri or fishing attractions of Bingara but wanting to avoid the very busy Newel Highway.

“The reduction in travel time would also greatly benefit those Moree locals who access medical and educational facilities in Tamworth.

“These initial works will bring another three families onto sealed road, making it safer for them to get to and from town, work and school.

“With the money now available, Moree Plain’s Shire Council has indicated the design work will begin in October, with road crews expected to be on the ground and working by Christmas.”

Mr Marshall said for local landholders, having this piece of Terry Hie Hie Road sealed was a dream come true.

“Grazier Allan Gillogly lives on Terry Hie Hie Road and is that excited about the project, he is willing to offer council any support he can to get the work done quicker.”

“Allan trucks hundreds of cattle along the road each year and by having it sealed will mean less wear and tear on his trucks and reduced travel time for his drivers going to market.

“Long term I can see there being zero dirt between Moree and Tamworth along this route and I look forward to working with Council to make that dream a reality.”

The injection will see $382 million of joint funding allocated to shovel-ready projects able to start in the next 12 months, driving an estimated 3,500 jobs in regional NSW.