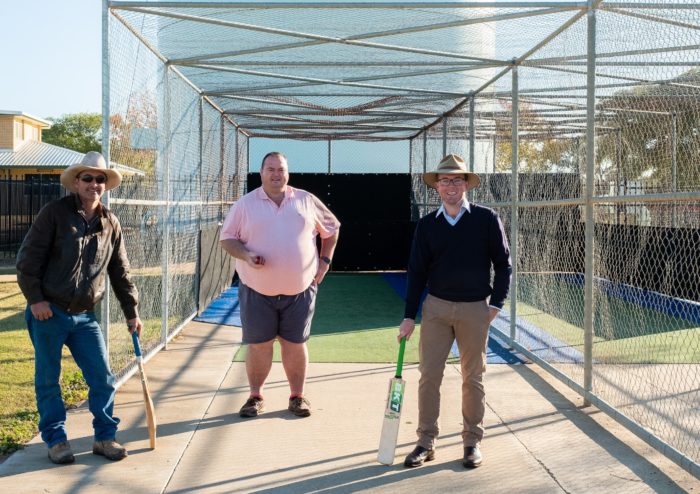 MOREE Junior Cricket Association (MJCA) is one step closer to achieving its goal of becoming a central training ground for representative cricket in the North West, with Northern Tablelands MP Adam Marshall today announcing the State Government will contribute $10,603 to expand the practice nets at Ron Harborne Oval.

Mr Marshall said MJCA had been working with Cricket NSW to construct an additional two practice nets, taking the total number at the ground to four.

“When it comes to honing the skills of a cricket squad, four nets offers much more opportunity to utilise bowling machines and have more players involved simultaneously,” Mr Marshall said.

“Cricket in Moree is undergoing a serious revival, with the current two nets unable to cater for 200 plus junior members and 80 seniors who need to train.

“Alongside the $10,603 from the NSW Sports Grants Program, MJCA has secured a $30,000 grant through the Australian Cricket Infrastructure Fund (ACIF), to build two nets on the number four oval side of the existing structure.

“While it has been the cricket club which has fought for this funding it really is the wider community which will benefit, with nets open for use by the public and Moree’s school sides.”

“Known to have one of the best pitches in the region, Ron Harborne Oval is gaining a reputation as a cricket precinct and the ideal location for Northern Inland rep training sessions,” Mr Watts said.

“Having four practice nets running in tandem will only enhance that position, with greater opportunity for batters and bowlers to train and sharpen their skills, under the eyes of coaches.

“I would also hope by improving Moree’s facilities, we might also see an increase in the number of representative sessions hosted here in a season, which would bring competitors to town and be beneficial to the economy.

“MJCA is ready to go with this project and we hope to have it completed in time for the commencement of the 2020/21 season. Hiring local contractors is a priority of the association’s and will be done where possible.

“Adam has been a huge supporter of what we have been trying to achieve here at Ron Harborne Oval and I thank him for everything he has done.”