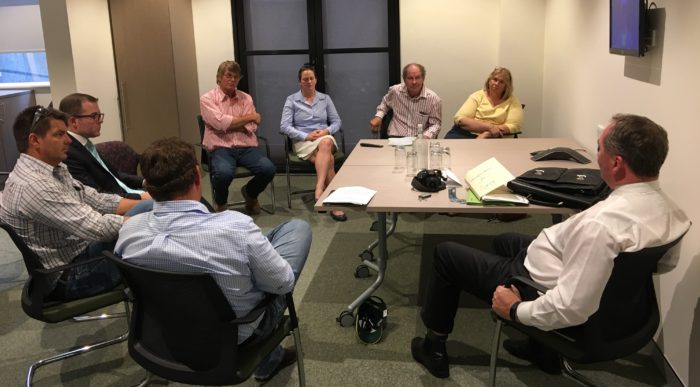 Border Rivers irrigators and Northern Tablelands MP Adam Marshall met with Deputy Prime Minister and Water Minister Barnaby Joyce in May last year to push for funding for a study on the Mole River Dam proposal.

NORTHERN Tablelands MP Adam Marshall has today announced a feasibility study of water security options in the Border Rivers catchment, including the famed Mole River Dam, will soon get underway.

Briefed by Water NSW at Parliament House recently, Mr Marshall said the study would analyse at the technical and financial feasibility of water security options in the Border Rivers, with a particular focus on a new dam on the Mole River.

“The benefits of a new dam on the Mole River have been known for a long time – this is a high-rainfall part of the state with relatively low evaporation so it makes a lot of sense,” Mr Marshall said. “The co-operation of State and Federal Governments to run the numbers is very positive for the region.

“A new dam would improve flood protection and boost supply reliability to irrigators and towns along the Mole, Dumaresq, Macintyre and Barwon rivers.

“I’ve been working with irrigators along this system for the last year and they’re all hoping this long-discussed dam can become a reality.”

Last year the NSW Government last year secured $530,000 from the Commonwealth’s National Water Infrastructure Development Fund to carry out the work, along with three other studies located in the Peel, Apsley and Bogan catchments.

Mr Marshall said this was another great example of the commitment of the government to water security in rural and regional NSW.

“Last year I announced $3.7 million for a new sewerage system at Bundarra and $3.9 million to upgrade Biniguy’s water supply under our Regional Water and Waste Water Backlog Program – but we are also investing in larger-scale projects that underpin productivity and our food and fibre industries in NSW over the longer-term,” Mr Marshall said.

WaterNSW is delivering the project on behalf of the Department of Primary Industries – Water, and has approached the market for a delivery partner.

Tenders close on the 20 May and Water NSW will announce the successful tenderer shortly thereafter.