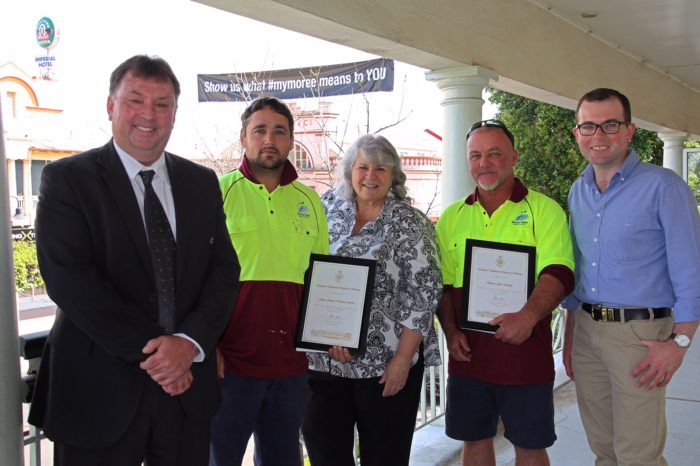 Member for Northern Tablelands Adam Marshall and Mayor Katrina Humphries presented Ashley Jarrett and Steve Moloney with Act of Bravery Awards at a special ceremony in Moree for their “selfless and brave actions” to rescue two infants from a burning vehicle.

The pair were on their usual work schedule in Boggabilla last month when they noticed the smouldering car and the young siblings inside.

“The quick and brave action of these two men has resulted in two young lives being saved,” Mr Marshall said.

“Ash and Steve put their lives at risk to ensure the safety of the children without a thought of their own safety – that is a true act of bravery.”

Both men were praised at the ceremony yesterday by Mr Marshall and Cr Humphries, attended by Councillors and council senior management.

“I congratulate Ash and Steve on their outstanding service to the community,” Mr Marshall said.

“I am very proud of them and I know council is too. They are a wonderful example to their fellow staff members and everyone in the community.”