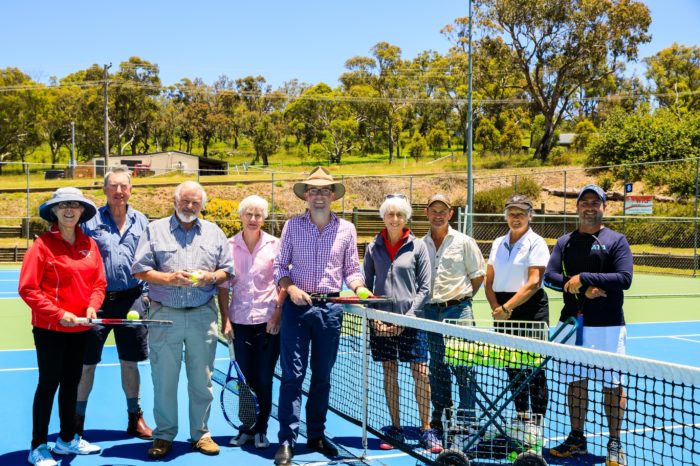 DESPITE growing membership numbers at Armidale Tennis Club there will be plenty of court time for everyone in 2022 after Northern Tablelands MP Adam Marshall this week announced a $41,000 State Government grant to install LED lighting over four of the club’s synthetic courts.

Mr Marshall said the current lights were outdated and posing problems for older players battling it out in night competitions.

“With 12 teams of four playing in the current Monday night Spring competition every court needs to be playable, otherwise it is long waits and late nights for all,” Mr Marshall said.

“The existing lights over the synthetic courts are the originals, and while they’ve overseen thousands of night matches in their time they are now shedding very poor light.

“The weakening lights are starting to pose some real problems, especially for the older players. The farthest court is by far the worst and is getting to the point where it is unsafe.

“LED lighting will not only improve visibility for players but also reduce the club’s power bills, freeing up funds for other improvements on site.

“These lights are just the start of club’s plans to modernise its facilities and I look forwarded to working with the committee to make the club worthy of hosting an open.”

“Our club is experiencing a period of growth, with 182 registered members,” Mr Jackson said.

“This grant, for LED lighting, will give us greater opportunity to grow tennis in our local community through better vision for night competition. The existing lighting is pretty poor.

“As President, I am thrilled. The committee has worked hard this year and this gives us the boost we need.

“Our local coach will be able to increase night lessons and, with the combination of our Clubspark book a court online system, more members of the public will have the flexibility to play at their leisure.

“I would like to thank Adam for his support to achieve this much needed funding.”