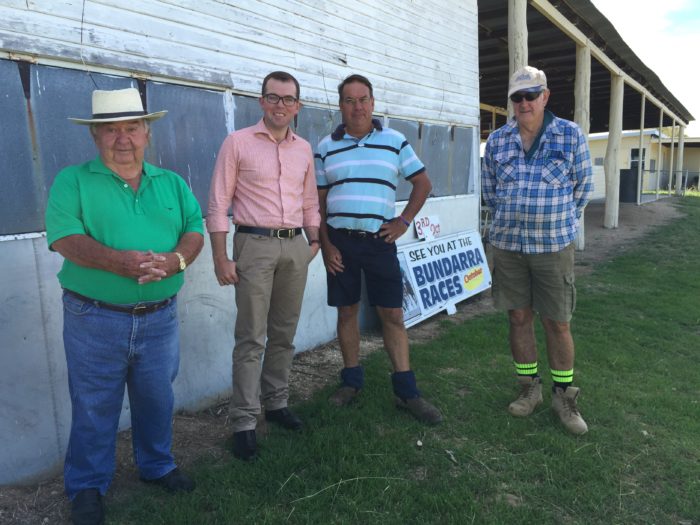 Mr Marshall delivered the good news to Bundarra Jockey Club committee members at the racecourse last week and was briefed on plans to replace the current inadequate and ageing canteen structure.

“The committee members work damn hard to keep the track and on course facilities in good nick, but the canteen the current weatherboard canteen structure has simply reached the end of its useful life,” Mr Marshall said.

“The replacement cost was a bit outside the financial capacity of the club, which does a great job marinating all the facilities on a meagre budget.

When they told me about their plans I was more than happy to go into bat for them and I’m really happy with the result.”

Mr Marshall said the new canteen would be a great improvement and make the task of catering for the annual racing crowds much easier.”

“The club’s looking forward to getting started on the project which will see a new shed built on the same site incorporating a covered barbeque area at the rear and service area,” he said.

“New modern fittings inside the canteen will be much more suitable for food preparation than the current arrangements too.”

The Bundarra Racecourse is home to the famous Bundarra Races, held each year on the first weekend of October.

“It’s always a cracker of a day with huge crowds from all around the region descending on Bundarra to enjoy some quality country racing and hospitality,” he said.

“With the new canteen now set to be up and running in time for this year’s races, locals and visitors alike should be able to enjoy themselves even more.

“The club now hopes to attract a few more functions to the course with the new canteen which will be a big help in their fund raising efforts.”