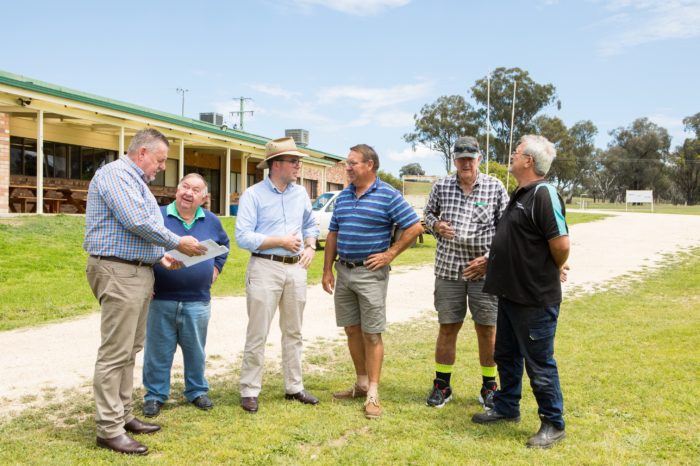 POPULAR community facility, the Bundarra Sport and Recreation Club, has secured almost $200,000 from the NSW Government to build a new amenities block to provide much-needed outside facilities for users of the grounds.

Northern Tablelands MP Adam Marshall visited the club last week to congratulate the club committee on securing a $197,300 grant from the second round of the NSW Stronger Country Communities Fund.

Mr Marshall said the improved sporting infrastructure at the grounds would benefit numerous user groups from the district.

“The Bundarra Sport and Recreation Club could be called the heartbeat of the town, it is a facility that is much-used and loved, hosting events from birthdays and weddings to wakes,” Mr Marshall said.

“The clubhouse is kept in wonderful shape by a small army of volunteers keeping it open and welcoming, but the sporting facilities, including the golf course, athletics track and sporting field have no outside amenities.

“I commend the committee for putting forward this project to construct an amenities block adjacent to the main field, with accessible toilets, showers and a canteen area.

“The new facility, once built, means that sporting groups such as rugby league, cricket, golf, athletics and the Bundarra Central School.”

“We were thrilled to learn the submission had been successful and plans are now underway to get a new amnesties block built as soon as possible,” Mr Layton said.

“We’ve struggled for many years as golfers and other sportspeople using the outside grounds, have to come inside the club to freshen up and with volunteers needed to be on hand to keep the clubhouse open, it was inconvenient.

“With this new facility available at the main sportsground, people will be able to enjoy their sport at their own convenience. It is a game-changer for sure.”