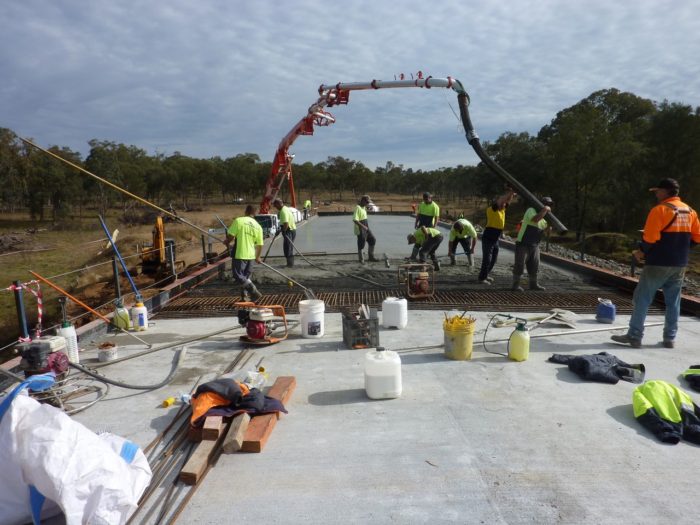 AFTER more than a 70-year wait, the Bundarra community will soon have a new Emu Crossing Bridge over the Gwydir River with construction of the new $4 million structure now in the final stages, according to Member for Northern Tablelands Adam Marshall.

Mr Marshall said the final bridge deck concrete pour was completed last week, which would allow for the new two-lane bridge to be finished later this month, 12 June.

“Following completion of the bridge structure, Uralla Shire Council’s road construction crews will recommence work on the 1.6 kilometres of road approaches at both ends,” he said.

“This is great news for the Bundarra community and the entire region. They’ve waited a long time for this new bridge and the whole project should be finished and open for use by September this year.

“Everyone locally is very excited as they can see the project is now in the final stages.”

Two years ago Minister for Roads Duncan Gay announced the $3.5 million commitment from the NSW Government to the rebuild. Tenders were called for the work in March last year and by May the Newcastle-based company Civilbuild Pty Ltd was granted the contract.

“Mayor Michael Pearce and I turned the first sod on the projects in July last year and Minister Duncan Gay visited the site in January to inspect the progress,” Mr Marshall said.

Mr Marshall said the project was jointly funded, with Uralla Shire Council contributing more than $500,000 and completing the approaches to the bridge.

“Thunderbolts Way is the only direct transport route between the towns of Bundarra, Bingara, Warialda and Inverell in the west, connecting them to Armidale and beyond so this upgrade has been essential and long overdue,” Mr Marshall said.

The current single lane crossing was built in 1919 and is regularly closed during minor flooding, resulting in a 95 kilometre detour for road users. The local community has been seeking a new bridge for more than 70 years and as early as 1935, the then Gostwyck Shire Council began making representations to the State Government for financial assistance to replace the existing bridge.