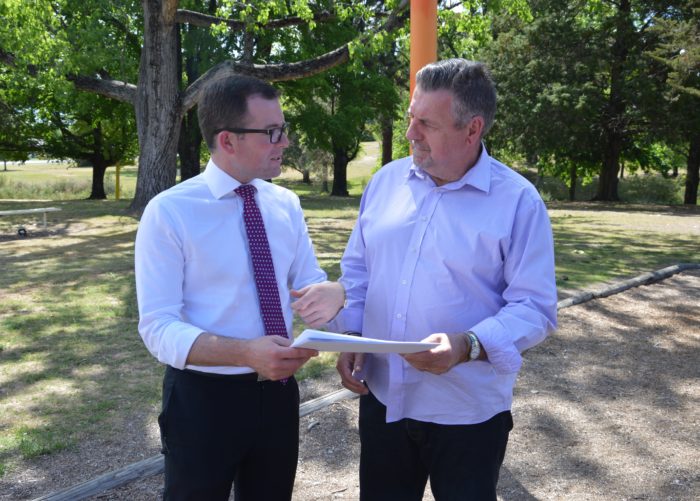 MEMBER for Northern Tablelands Adam Marshall and Uralla Shire Council Mayor Mick Pearce have today launched a petition calling on the State Government to help fund the installation of a liberty swing in Uralla’s Alma Park.

Mr Marshall said the Liberty Swing was the world’s safest and most recognised swing for children and adults in wheelchairs and called on the Uralla community to get behind the push for state government assistance and to sign the petition.

“Uralla is working towards becoming a ‘disability friendly’ town and the installation of a liberty swing, the first in the shire, has become one of council’s main priorities,” Mr Marshall said.

“I would like to urge the community to sign this petition which calls on NSW Disability Services Minister John Ajaka to help fund the project.

“Alma Park is a popular site for residents and travellers and although the park features the town’s most comprehensive playground, it lacks wheelchair-friendly equipment.

“The issue of the park’s limitations was partly addressed some years ago with the construction of an amenities block containing disabled facilities and the realignment of a park access point to enable wheelchair access. This did not however address the failings of the site to provide recreational facility for this section of the community.”

Mr Marshall said he had successfully petitioned the Minister to assist the Inverell Shire Council with the purchase of a liberty swing for Victoria Park and believed that a strong show of support from the community for the project would again encourage the Minister to look favourably on their request.

Cr Pearce joined Mr Marshall in his call for community support for the petition and said Council was very keen to see a Liberty Swing installed at Alma Park.

“Uralla Shire Council has a goal of creating a liveable and inclusive town for all community members and this is well under way with various plans for improved access and infrastructure for people with a disability,” Cr Pearce said.

“The project also has the capacity to help boost the local economy as we expect the swing will encourage travellers to stop in Uralla.”