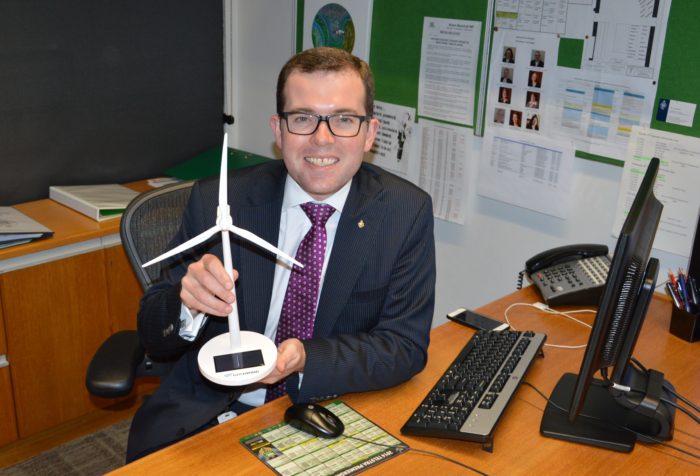 Northern Tablelands MP Adam Marshall with a ‘smaller version’ of the White Rock Wind Farm turbines, which will soon be constructed near Glen Innes.

Mr Marshall said the three-stage work program would take place between Inverell and Glen Innes, offering 37 work packages in the first stage and injecting up to $40 million into the local economy during construction.

“Up to 200 local jobs will be created during construction and up to 15 local jobs during ongoing operations,” Mr Marshall said.

“It’s a fantastic example of the government and industry working together to provide opportunities in our region and maximize the economic benefits of large projects like this.

“This will benefit the region immensely through industry diversification and innovation in renewable energy investment,” he said.

“This is another example of the important role renewable energy projects will play in our region’s growth and economic diversification.”

Expressions of interest (EOI) for the White Rock Wind Farm are open until 30 October 2015. The EOI is offered through the Industry Capability Network NSW (ICN NSW), which is supported by the NSW Government. ICN NSW helps match NSW and Australian suppliers with major work opportunities through a simple online gateway.

For information on the White Rock Wind Farm project and to lodge an Expression of Interest, visit http://gateway.icn.org.au/project/3695/white-rock-wind-farm-project