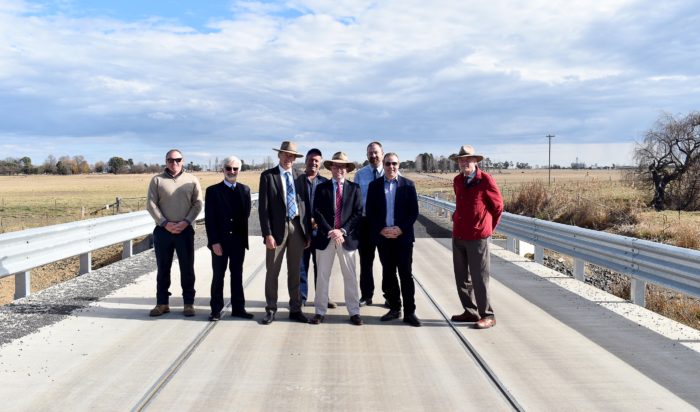 The new Cam Creek Bridge will ensure the vital transport link, Rangers Valley Road, remains open in all conditions, providing access to around 17,500 heavy vehicles each year to Rangers Valley Feedlot, the sixth largest in Australia, the New England Highway and other key freight hubs.

“Hundreds of tonnes of produce are transported along this route every day,” Mr Marshall said.

“This new bridge replaces a low single land structure, which was at risk of being load limited and was infrequently closed due to floodwaters.”

“Those issues will now be a thing of the past and the new bridge gives security of access to Rangers Valley Feedlot and also makes the road much safer for locals, who share the road with heavy vehicles each day.”

Work on the new bridge began last October and included an increase in the scope of the project to also provide a new alignment for heavy vehicles and at one metre higher than the old single-lane bridge, is also flood-proofed.

Mr Marshall said the project received $250,000 in funding from the NSW Government as part of the Restart NSW Fixing Country Roads program, another $250,000 from Rangers Valley Feedlot through developer contributions held by Glen Innes Severn Shire Council and $120,000 from the council’s bridges renewal program.

“It’s a great example of a partnership between two levels of government and private enterprise to bring about significant improvements for road users, business and transport and industry,” Mr Marshall said.

“This upgrade has removed a significant pinch point on Rangers Valley Road – an important freight route for the beef industry and it increases connectivity and productivity.”

This project has involved upgrading the road surface on Cam Creek Bridge and establishing a two-lane structure to reduce the risk of collision. The bridge’s load capacity has also been improved to cater for Higher Mass Limit vehicles.

“Ensuring that Cam Creek Bridge can support high volumes of heavy vehicles will play a huge role in creating a more efficient road network in this area,” Mr Marshall said.

“Rangers Valley Road transports an average of 400 tonnes along the Cam Creek Bridge route every day, with an annual stock movement of over 90,000.”

“By easing and removing the bottleneck that used to build up at the bridge, more heavy vehicles can safely travel along this route. It’s much safer for everyone else too, in fact the local school bus travels it and I know parents will feel infinitely more comfortable for the safety of their children.

“We will now see a significant reduction in travel times – slashing transport costs for our local businesses.

“Not only will this project make our regional businesses more competitive on the international market, but it will also provide vital safety upgrades for the local community.”

Northern Tablelands MP Adam Marshall has today announced the team which will undertake the detailed design of the $80... Read More