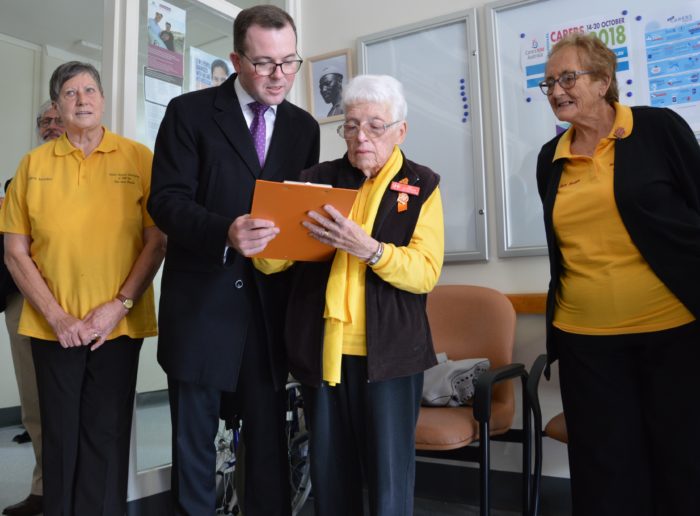 VOCAL locals have joined Northern Tablelands MP Adam Marshall in Glen Innes today to launch a petition aimed at driving a community and political campaign to secure a $20 million refurbishment for Glen Innes District Hospital from the State Government.

Members of the local hospital auxiliary joined Mr Marshall at the hospital in a high profile pitch to the State Government and local health departmental leaders from Hunter New England Health to make the project a budget reality.

Mr Marshall said Glen Innes desperately needed a refurb program and he’s driving a two-pronged campaign from community and politics to get it.

“By showing we’ve got widespread community support for this project, we’ve got more political muscle to achieve that,” Mr Marshall said.

“By bringing the community together to show support, it makes a stronger case to secure the $20 million I reckon is the minimum project budget we need.”

A group of about 40 supporters were at the hospital as Mr Marshall launched the petition with auxiliary members the first to sign up.

Mr Marshall said the public push would seriously add weight to the lobbying he would undertake with Ministerial colleagues.

“Don’t doubt that people power means something because I want to make sure when I go to the Health Minister and Treasurer later this year saying I want $20 million for Glen Innes that I’ve got the strongest possible case I can to put on the table,” he said.

“People power is a powerful and essential ingredient when it comes to political push on this scale.”

“This Glen Innes campaign will be fought in a similar vein with the same dogged determination so that we give ourselves the very best chance of achieving our goal,” Mr Marshall said.

“Health facilities are so critical not only for sustaining communities but for continuing to meet demands as the region grows.

“We are here to kick off this petition which will be available everywhere around town for people to sign and demonstrate their support for this upgrade.

The upgrade will include the removal of the old nurse’s quarters which are derelict and an eyesore, and then to upgrade the current hospital to bring it in line with the other modern hospitals.

Mr Marshall said he was delighted to secure the very first signature on the petition from Jan Sharman OAM, who is a tireless worker for the community, especially in working to improve health services in Glen Innes.

“There are so many things that could be done and I am going to make sure this community gets right behind the petition so we can send a clear and strong message to the government that Glen Innes deserves the best facility possible,” Mrs Sharman said.

“I am determined that this upgrade happen and while the nurses quarters might evoke good old memories, it has had its time and maybe once that building has gone, there will be room to build some overnight accommodation for staff and visitors.”

Mr Marshall said he’d been pleased to deliver news of a half-million-dollar upgrade to the Glen Innes hospital last year, which saw the completion of air conditioning and medical gas upgrades last December.

At the time, Mr Marshall said the upgrades would make Glen Innes Hospital a more comfortable place for patients, while boosting standards of clinical care through improved efficiency for staff.

“But I said at the time, that given the go-aheads on the Inverell and Armidale redevelopments, it was also time to look to major works for Glen Innes,” he said.

“Well, that time is now and we’re off and running and we’re aiming for a win here too.”

“Between the Opportunity Shop, bake sales, fundraisers and raffles, the Auxiliary has shown that this is the Glen Innes Community’s hospital,” Mr Marshall said.

“And I hope the whole Glen Innes community will support that fantastic volunteer spirit by asking for more financial support from the government to build on that.”