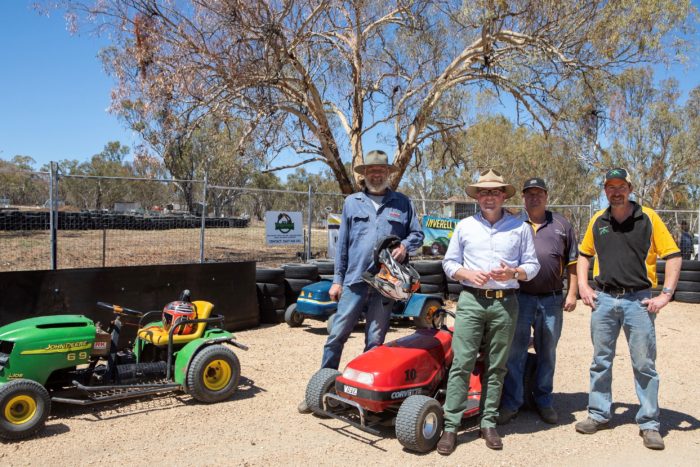 Inverell Mower Racing Club members Glen Davidson, left, Craig Wilkins and Brad Hanna with Northern Tablelands MP at the track this week, which Mr Marshall tried out for himself.

Mr Marshall pulled on a helmet alongside motor racing stalwart and Inverell Mower Sport Founder Steve “Jacko” Jackson to put the new track to the test.

“Twelve months ago the former go kart track was overgrown with grass and full of cracks, now it’s on the verge of being the first licensed mower sports venue in the state,” Mr Marshall said.

“For people like me who have petrol running through their veins it’s brilliant to see how much work has taken place here with 360 metres of new race surface laid down on the back straight and dog leg, chief stewards stand built and three grandstands watching over the home straight.

“With any motor sport safety is the priority and Jacko and his committee have not left anything to chance installing a fence on the main straight to stop debris flying into the crowd and a further three metre fence near the finish line to stop spectators getting too close.

“The State Government provided $15,000 to help the club get these works off the ground and I think the track could be the next big attraction for Inverell.”

Mr Jackson said he hoped the Inverell Mower Sport Precinct becomes a blueprint for tracks across the state.

“Currently in NSW there is no venue for mower sports like what we are building here on Ashford Road,” Mr Jackson said.

“I have been working with the Office of Sport to get our venue recognised as a legitimate racing track and while we still have some way to go and I am confident we will achieve that outcome.

“It’s my hope we can get the track licenced and fully operational within the next year because the sports unofficial governing body the Australian Ride On Lawn Mower Racing Association (AROLMA) has offered us the 2021 National Titles.

“In the past this race meet has brought up to 700 mowers into the host town, delivering a boost to the local economy as competitors stay in accommodation and spend money in local businesses.

“We still have a bit of work left to do to make the track ready to host an event of this standard with plans for us to build a specialised pit stop and put down a second layer of racing surface.”