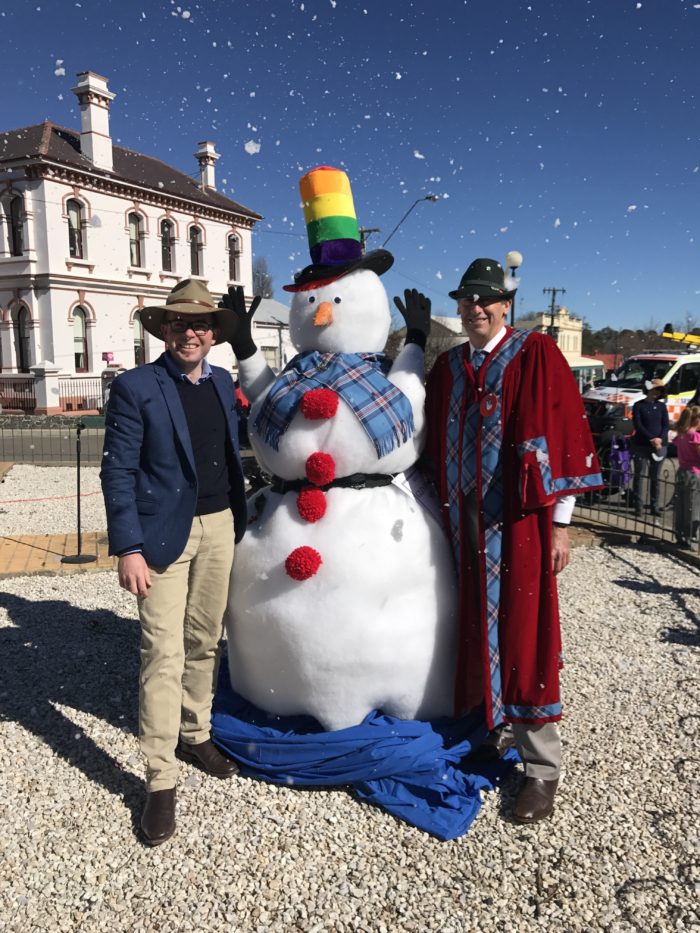 MEMBER for Northern Tablelands Adam Marshall has commended the ingenuity, commitment and enthusiasm of everyone involved in the recent ‘Chill N Glen’ festival on the floor of the NSW Parliament.

“Whenever the Glen Innes community decides to put on a show or event of some sort, the community rallies and it is all hands on deck,” Mr Marshall told the Legislative Assembly during a speech last week.

“That is exactly the attitude that made the inaugural Chill N Glen Festival, held a few weekends ago, so successful.”

The Chill N Glen festival, organised on a weekend that experiences frequent snowfall, showcased the many appealing features of a colder climate. With attractions evoking the feel of a European Christmas, Mr Marshall said there were plenty of opportunities for local businesses to get on board.

“There were very few community organisations that did not get caught up in the excitement of being involved in this winter escapade,” Mr Marshall said.

“The festival opened on Saturday morning with the ringing bells of the traditional town crier, and it was not long before the main street was filled with visitors and locals enjoying the novelty and wares of 47 European Christmas craft stalls.”

Through presenting the Chill N Glen Festival’s success to Parliament, Mr Marshall ensured the event would be permanently recorded on Hansard, the official records of the NSW Parliament.

“This first festival was a tremendous success, highlighting the incredible initiative of the Glen Innes community,” Mr Marshall said today.

“Attracting several thousand travellers into the town, I have no doubt that the festival will continue to grow and offer a unique experience to visitors. We’ll be able to look at the Hansard in years to come – and remember Chill N Glen’s first promising year.”

** Hansard copy of Mr Marshall’s speech is over the page

Mr ADAM MARSHALL (Northern Tablelands – Minister for Tourism and Major Events and Assistant Minister for Skills) (18:01): Once again it is a great pleasure to bring to the attention of the House the amazing spirit and camaraderie of the residents of the wonderful community of Glen Innes. Whenever the Glen Innes community decides to put on a show or event of some sort, the community rallies and it is all hands on deck. That is exactly the attitude that made the inaugural Chill N Glen Festival, held a few weekends ago, so successful. As many members will know, while the cold winter weather in the New England can be fairly daunting, the Business in Glen [BIG] committee decided to make that weather the star attraction of its new festival showcasing the beauty and wonder of Glen Innes in wintertime. Research was conducted and it was agreed that 22 and 23 July had the highest probability of a weekend of snow—and when it snows in the New England visitors from the warmer climes of the Queensland border region have a tendency to head south to frolic in a winter wonderland.

Although snow was forecast for that weekend, organisers left nothing to chance and hired a couple snow-making machines just to make sure. The irony is that it was too cold in Glen Innes that weekend for the snow machines to produce snow—minus 7 degrees apparently is not conducive to these machines producing snow. I was rather disappointed as I was looking forward to seeing Glen Innes and District Services Club General Manager Pat Lonergan tobogganing down the main street. Perhaps I will see him do it next year. Festival organiser and Business in Glen Secretary Kylie Hawkins led the way for the six months it took to prepare for the event. However, she was the first to congratulate the entire community on their support and willingness to down tools and lend a hand.
In fact, as far as I could see, there were very few community organisations that did not get caught up in the excitement of being involved in this winter escapade. The festival opened on Saturday morning with the ringing bells of the traditional town crier, and it was not long before the main street was filled with visitors and locals enjoying the novelty and wares of 47 European Christmas craft stalls.
Caledonian Society stalwart Garek Fysch and his committee are to be congratulated on bringing together such a diverse and interesting array of market stalls, which truly set the scene of a winter festival. The response was phenomenal.

As with all community events in Glen Innes, there were lots of activities for the children. European Christmas characters dropped in to surprise and delight. The Glen Innes District and Community Centre’s Brenda Beauchamp, with her team of helpers, put together hundreds of “Welcome to Glen Innes” packs for visitors and organised a myriad of children’s craft activities. Ruth Sim-Brummel did an amazing job coordinating the family fun carnival. Leanne Hamel was magnificent in organising the street decorations, and local business owners obviously had fun decorating their shopfronts in true Christmas in July fashion. David Williams and Jo Enoch from Art on the Corner coordinated an art exhibition in the town hall which drew crowds and featured many different exhibiting and local artists.

Festival-goers maintained their energy levels at the many food outlets along the street and at Café Zoom, a pop-up restaurant offering European delicacies. Local restaurants joined in the merriment and fun, offering traditional Christmas fare for dinner on Saturday. I particularly loved the ice cream waffles provided by the Country Women’s Association, which were absolutely delightful—and perfect for breakfast and lunch on a winter Saturday in Glen Innes. I understand the Glen Innes Pipe Band made an appearance at one venue, piping in the traditional Scottish haggis for everyone to enjoy. There is nothing better than a bit of haggis in Glen Innes! Glen Innes Severn Council grants officer Sheryn Nourse and Visitor Information Centre staffer Sal Molesworth went above and beyond to ensure the smooth running of the festival.

As always is the case of local events, everyone was willing to lend a hand. Council was very supportive, as was the Glen Innes Severn Tourist Association, Destination Glen Innes, the Caledonian Society, local primary and secondary schools and many clubs, organisations and local businesses. The State Emergency Service helped to set up, and Paddy Platypus from the SES was there. Rotary put on the fireworks at the showground on Saturday evening. Heritage expert Graham Wilson took visitors on free one-hour tours to local heritage sites. There was something for everyone. The festival was a veritable bonanza for Glen Innes. Even 19 inmates from the Glen Innes Correctional Centre volunteered their time on Saturday morning to help set up in minus 7 degree temperatures. Congratulations, Glen Innes, another wonderful festival promoting one of the best areas of this State.