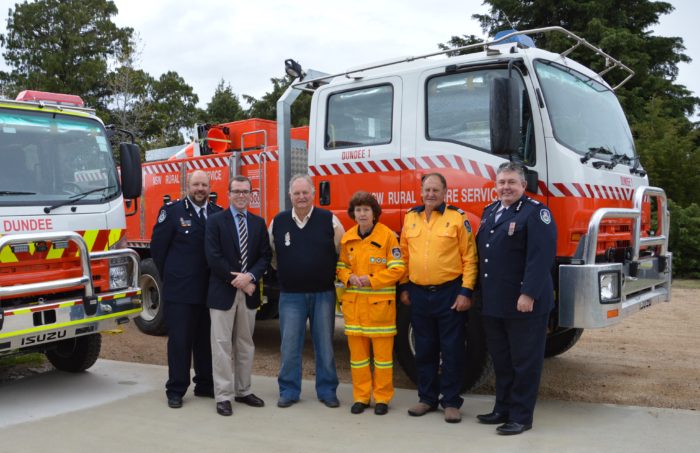 MEMBERS of the busy and active Dundee NSW Rural Fire Service (RFS) Brigade had a lot to celebrate over the weekend, with the presentation of long service medals to two of their volunteer members and being handed the keys to its second new tanker in the last 12 months.

Northern Tablelands MP Adam Marshall was on hand to present brigade captain Garry Parker with the keys to the new $150,000 category 1 tanker (CAT 1), which replaces the outdated 26-year-old model. Earlier this year, the brigade took delivery of a new CAT 7 dual cab tanker, which was also proudly on display during the ceremony.

“This new truck will be a priceless resource for the brigade, providing the latest and best equipment to keep our RFS volunteers safe on the fire ground and help them do their job as best they can,” Mr Marshall said.

“The last four years has seen huge change and progress for the Dundee brigade, with increasing numbers, a brand new station, new Cat 7 truck and now a new Cat 1 tanker to top it all off.

“Garry Parker and his volunteers do a magnificent job responding to grass fires across the district and also attending motor vehicle accidents on the New England Highway and on behalf of the community I thank them for their service and dedication.

“The government and community owes the brigade its full support and the best equipment we can provide.”

Mr Alt received his long service medal with a fourth clasp for an outstanding 53 years membership and service to the brigade.

“Jack joined the RFS in 1962 and was elected secretary/treasurer of the Dundee brigade the same year, a position he held for 42 years,” Mr Marshall said. “Jack’s still very active within the brigade and today holds the position of permits officer.”

Mrs Wehr received her long service medal in recognition of her 22 years of service to the Dundee brigade.

“I congratulate Jack and Dayle on receiving their medals and thank them, for their service to our community and to the RFS,” Mr Marshall said.