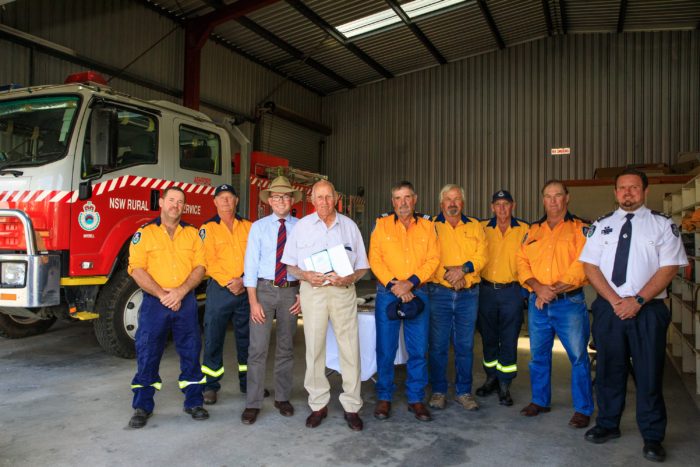 Mr Marshall hosted an afternoon tea last week with Bill’s family and members of Ashford RFS Brigade, at the RFS station, to celebrate the occasion and Bill’s seven decades of service.

Mr Marshall said it was an honour to present Bill with his award and recognise life-time of community service.

“In 2015, I had the privilege of presenting Bill with his fifth-clasp for his astounding 63 years of service to the NSW RFS – seven years on and he’s still involved and still as passionate as ever,” Mr Marshall said.

“Bill joined the Rural Fire Service in 1952 and served as Deputy Captain of Ashford for a massive 52 years and was President between 1999 and 2007.

“Over that time he has seen the service undergo significant change, with modernisation of firefighting equipment and changes in attitude towards bushfire hazard reduction and firefighting techniques.

“Born and bred in Ashford, Bill’s experience and wealth of local knowledge has been invaluable to his fellow brigade members, in particular, those new to the RFS.

“Bill is held in extremely high regard by the Ashford community, as well as members of other emergency services who have worked beside him during challenging times.

“Though no longer an active member of the brigade he is still available, ready and willing to lend a hand when there is work to be done.

“Bill’s incredible commitment is typical of people born of his generation and should act as inspiration to all who are considering getting involved in their community.

“I can’t think of anyone more deserving of this accolade and I sincerely thank Bill for his service and dedication to the people of Ashford.

“We need more Bill Bakers in our local communities.”